And then there were three

OK gang, for those of you that were up for getting the 5 free cards, they arrived today!  It'll probably take me a day or two to get them sorted for each person and then tucked into some PWE's to send out.

More on that in the days to come.

Part of the big COMC order were a few cards that I already purchased before.  Two of them were 40% of the remaining cards I need to finish my '64 Topps set. 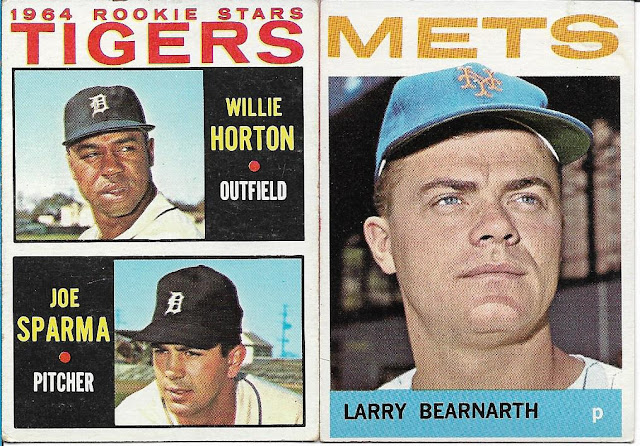 I had actually bought these before the year started, so they didn't count towards the annual $2K spending budget.  Instantly when I looked at these two cards, I thought "who is Joe Sparma?"  A quick look at baseball reference dot com showed that Joe actually had an OK career, 52 wins over 7 seasons between 1964-1970.  His best season was 1967, winning 16 games with 5 shutouts.  Joe unfortunately passed away quite young, at age 44 due to complications from triple bypass surgery.  Joe was also part of the Tigers WS champion team in 1968, giving up 2 runs in just a third of an inning.  The home run that Joe allowed was to none other than Bob Gibson of the Cardinals.

Just three cards to go to finish off the '64 set.