It doesn't appear as if I will be spending any more money on cards during February, so I'll have $1792 left in my $2000 budget for the remaining 10 months of the year.

I honestly thought that by giving myself a little more money to spend on cards that I'd go a little more "spend happy", but it's actually worked the other way around.  If I were to have spent $30/week over the first 9 weeks as normal, that would add up to $270.  I've only spent $208 thus far.

I'm sure part of the decline is that I didn't hit the monthly card show in February.  That's usually good for 70-80 bucks right there.

But enough babbling, you're wondering what the latest purchase was.  Well, I added 75 bucks to my COMC account a few weeks ago in order to purchase cards for the guys who wanted a handful.

That's done.  I received the final address I needed yesterday, and the envelopes will go out tomorrow for sure. (I couldn't get to the post office yesterday because I received a call late Friday to help out a friend to mix concrete, which took up a good portion of my Saturday.)

The order didn't take up the entire $75, so I was fortunate to add a few cards to my personal collections. 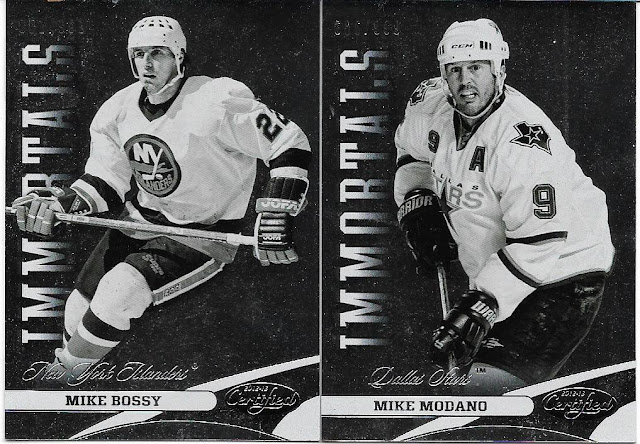 I really like the black and white photos of the Leaf Certified Immortals cards, so I snagged a couple more for the SNI hockey project.  Mike Bossy is #'d 51/699, while Mike Modano is #'d 686.  Scratch those two off of the want list.

Three more SPs from the long neglected 2012-13 OPC set are now off the list.   I've always been a big fan of the artwork on goalie masks, and the Rogie Vachon card jumped right out at me.  Sometimes less is more, and the Crowns above the eyes on Rogie's mask are a perfect example.  Perfect.  Tim Kerr was one of the best power play scorers during the 80's, amassing 20 or more PPG in a season 4 times, including an amazing 34 PPG during the 85-86 season.  Those 34 goals on the power play are still an NHL record, one that may never be touched. 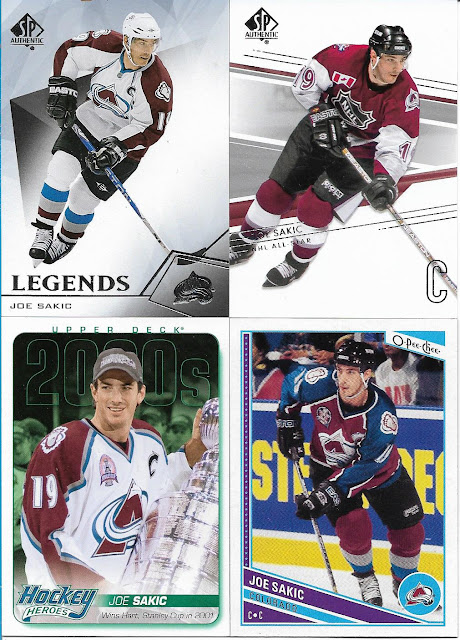 Finally, I grabbed a handful of more recent Joe Sakic cards to add to my collection.   They won't be shown off on the PC blog anytime soon, so there was no worry of showing them off here.  I wouldn't mind getting a few more followers on that blog, I'm hoping to hit 25 within the next couple of months.  Maybe I'll give something away if I do...