Shopping isn't as easy as I thought it was

Started buying for people yesterday on COMC.  My last (and final) count was 19 people who wanted some free cards, which is good, because free is good right?

[EDIT:  Just got the 20th "volunteer" for the contest, so I'm going to consider it closed.   Thanks to all who stepped up!!]

Well, I sat down in the afternoon and started with a couple of what I thought would be easier bloggers to buy for.

30 minutes later, I shook my head and thought that I might have bit off more than I can chew.

Not complaining my friends, no not at all.  But I severely underestimated the time it's going to take to go through everyone's want lists and pick out some cards to purchase.  By the time I'd finished the 6th person's shopping list, I'd already burned through 90 minutes which means by the time I finish the 13 others, I'll have consumed 5 hours (estimated).  SURPRISE!!

No worries though, I'm glad that I can do this.  It's also teaching me a couple of things about searching through want lists as well, kind of reading between the lines of what people want, if you know what I mean.  So while that project continues this afternoon before the Super Bowl kickoff, here's page #31 of the baseball SNI set for your perusal.   Enjoy! 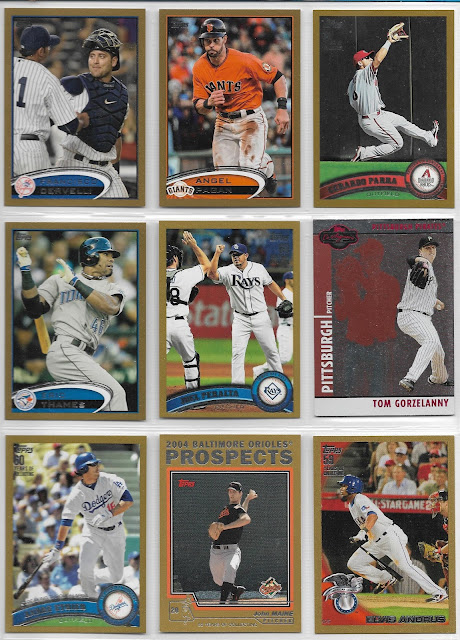 Favorite card on the page:  Nice shot of Gerardo Parra making a sliding catch is the winner for me.
Totally by accident that there's 8 Topps gold parallels out of 9 cards on the page.   Pretty sure that's the first time that there's been that many on a page.  Pittsburgh also still way behind the pack with only 4 cards so far, while Toronto becomes the first team to pass the 15 card mark.

I did most of the damage on this page, as I was responsible for 6 of the 9 cards.  2 of the 3 others were from Michael at Nomo's Sushi Platter, while the third was from Tom at Eamus Catuli (waiting til next year was much easier to type by the way, lol).

Thanks for reading, Robert
Posted by Robert at 12:29 PM