Double digits is fine with me

I just happened to read Night Owl's post about the writing doldrums from yesterday, and it reminded me of part of the reason I don't write as much as I used to.

I just don't have the push to sit down and write longer blog posts like I used to.

I've been off the past 3 days this week, and this is the only post I'm going to write during that time.  My how times have changed.

I actually fired off a few tweets on Monday, including the Jose Bautista bat flip card that I pulled 2x from Opening Day packs I bought at Target.  What I enjoyed the most about the tweet was that I had 4 offers for the flagship Bautista card (even though I already had it) from that single tweet.  It appears that the card community on twitter is just a great as the one I've dealt with for nearly 5 years in the blog world!! 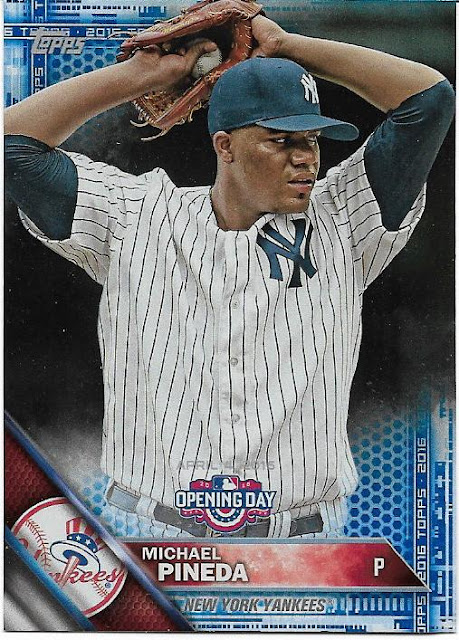 I also tweeted about the blue parallels from Opening Day.   To save characters I should have tweeted this:

I really do like the blue parallels in Opening Day.  I found that they were easier to spot than the golds from flagship.  The Pineda above is heading to The Lost Collector once I round up a few more Yankees cards to send his way.

I also have the Stephen Strasburg blue parallel if anyone is interested. 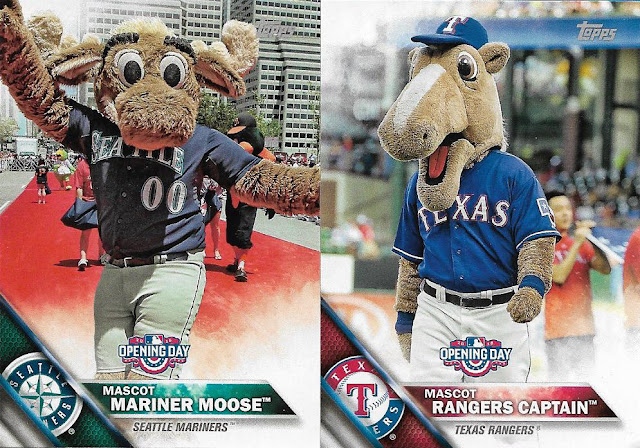 I also tweeted about the mascot cards, nothing special really, but I got a re-tweet from Beckett, which was very surprising.  These are available by the way if anyone needs/wants them.

What I've ended up doing with this post is turning a minor post about 2016 Opening Day cards into a post about my lack of blogging over the past several months.

I'm happy with posting 10-15 times during a calendar month now.  I'm not putting pressure on myself to be creative like I used to.  My player PC blog is becoming a very good outlet at churning out posts.  3-4 lines about the card, or the player, or the value of the card is much easier and less time consuming.  With my PCs now approaching 1000 cards total, posting one card a day over there is going to keep me busy for quite a while.

Maybe one day I'll get back to writing something of reasonable quality on this blog.  But right now, double digits is fine with me every month.

thanks for reading, Robert
Posted by Robert at 12:25 PM