Got to make some room in the Blue Jays box for the cards that came in from fellow bloggers over the past few weeks.  What better way to do it than to get some of the stragglers together in pages and into some binders.

I've had a few '59 Topps cards come my way this week, so when I started looking through the box and saw the group of 2008 Heritage cards, it only made sense to put them together for a post.

I really don't miss this Jays logo, and none of these 3 really lasted that long in a Jays uniform to be missed as well.   Eckstein played 76 games and didn't last the entire 2008 season in Toronto.  Inglett just played 147 games in 3 seasons with the Jays, and Glaus played 2 seasons in Toronto before being traded for Scott Rolen before the 2008 season started.

Middle row:  A couple of 1st basemen and a checklist

Was 2007 the last time we'll see a team photo on the flagship Topps set?  That's the last time I remember one appearing anyhow.  Adam Lind looks quite a lot different now with the extended beard (which suits him), and we'll see how he and the beard does now that he has returned to the AL with the Mariners.  Almost half of Overbay's 1355 career hits came during his 5 year run in Toronto, and I can still remember that Lyle was a doubles machine, hitting over 50 of them during one season in Milwaukee.

McGowan, Marcum and Banks.  Sounds like a law firm, doesn't it?  Picturing Josh Banks as a Jay was a bit of a stretch for Topps, as he only pitched in 3 games during 2007 and was claimed by San Diego on waivers in April of 2008.  Marcum was the player that the Jays traded in order to get Brett Lawrie.  I had no idea that McGowan was still kicking around the majors, but I see that he signed as a free agent with the Marlins over the winter. 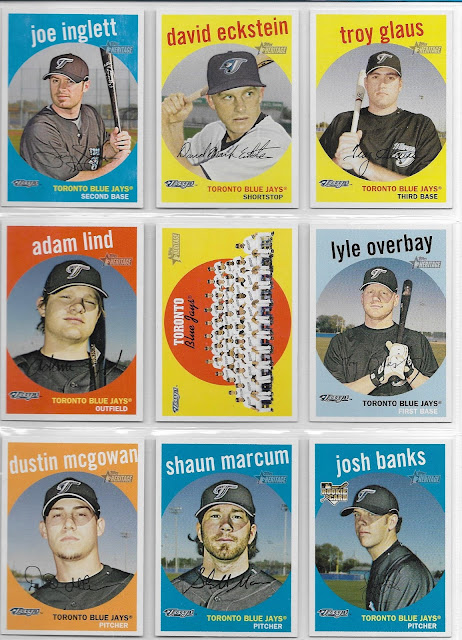 Not quite as good as a completed '59 Topps page, but it'll do since it gets 9 more cards out of the big box of Jays.  One of the color combinations I like in the '59 set is the green border with the white lettering, unfortunately none of these cards fits the bill.

Email ThisBlogThis!Share to TwitterShare to FacebookShare to Pinterest
Labels: 2008 Heritage, by the page, Year 5-Week 33