I had scanned this card months ago in order to write about it, but it sat in the draft folder just collecting dust.  So it's time to find out about these two pitchers, deemed to be Batter Bafflers by the good folks at Topps. 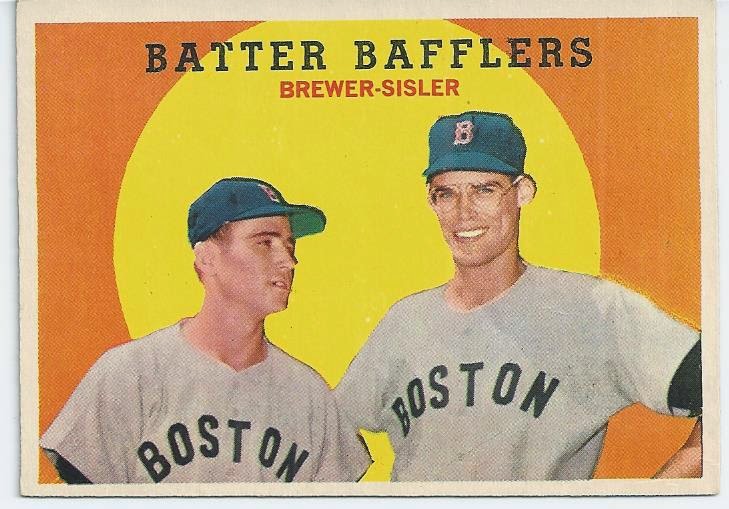 The players listed are Tom Brewer (left) and Dave Sisler.  The card itself is in really good condition, well centered and no nicks or dings on the edges or corners.  Brewer had an 8 year major league career, all with the Red Sox, between 1954 and 1961,  Sisler's career was 1 season shorter, lasting from 1956-1962. 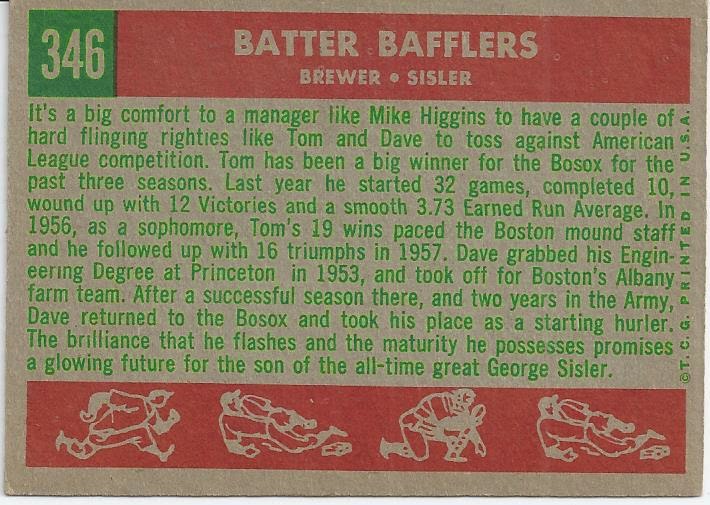 The back is also in decent shape, the borders look a bit off line though.

How'd they fare in 1959? Dave Sisler only lasted a month in a Red Sox uniform in 1959, as he was traded on May 2nd with Ted Lepcio to the Tigers for Billy Hoeft.  Sisler's days as a starter were over, and the final 4 years of his career were spent in the bullpens of Detroit, Washington and Cincinnati.
Tom Brewer had a decent '59 season with the Sox, completing his 6th straight season of double digit wins and earning a couple of saves as well.

Brewer's best start of the '59 season was his 2nd, against the Yankees on April 17th.  Tom pitched a 2 hit shutout, facing only 31 batters.

Dave Sisler's best relief appearance in '59 was his 2nd to last appearance of the season, coming in the game in the bottom of the 8th against the White Sox with the bases loaded.  Dave got out of that inning and the Tigers hung on to win 5-4 on September 20th.

While the concept of the card was a good idea, results over the next couple of seasons didn't pan out for the Red Sox.