Have modern RC's lost their luster?

I had mentioned on Sunday that our friends at K-Mart afforded me the opportunity to purchase another pack of update free of the parallels that dot the packs from other big box stores.

I showed off the inserts in that post, but one other card caught my eye. 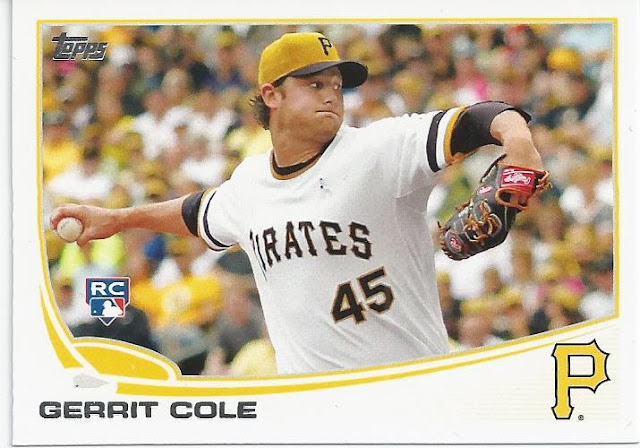 I like this kid.  Yes, I can call him kid because he's 1/2 my age.  I really enjoyed watching him pitch for the Pirates this year, and I hope to get an opportunity or two in 2014 to watch him throw live.

It seems like I've been hearing about him for a while, but it's only been 2 years since he was drafted by the Buccos.

Upon seeing this card, I saw the rookie card logo in the lower left, and it got me to thinking.

Do rookie cards excite me anymore?  The one and only RC that I've "chased" since this blog started was the 2010 Topps Buster Posey card.  The reason I hunted for that card was to complete that set, not because I was a big RC/Posey fan.

I can't say that I've chased any rookie cards at all since the early 90's, when it was all the rage to buy 50 or 100 counts of RC's to try and cash in on the next big thing.  Now, outside of trying to pick up the big RC's from vintage sets, rookie cards just don't do it for me anymore.

I'm sure that the legions of Yasiel Puig/Bryce Harper fans probably have different thoughts on this subject, but honestly there's not one player out there that excites me enough that I need to rush out to the next card show and snatch up a bunch of their RC's.