Living in the past

You won't see this very often on this blog.  I went almost 4 weeks without making a card purchase.

Yes, you read that right.  Total cold turkey from cards for 26 days.  Amazingly, I didn't get the shakes, start compulsively itching or even start wandering the streets looking for cards in the gutter.

This past Wednesday morning, that changed.  I had the late shift on that day,  so I woke up in the AM and hit Sportlots, looking to purchase something.  It had been quite a while since I visited Sportlots, and I was surprised to see that they had made quite a change to the homepage.

For some reason, what interested me most was working on some older hockey sets, ones that have been on my radar for many years. 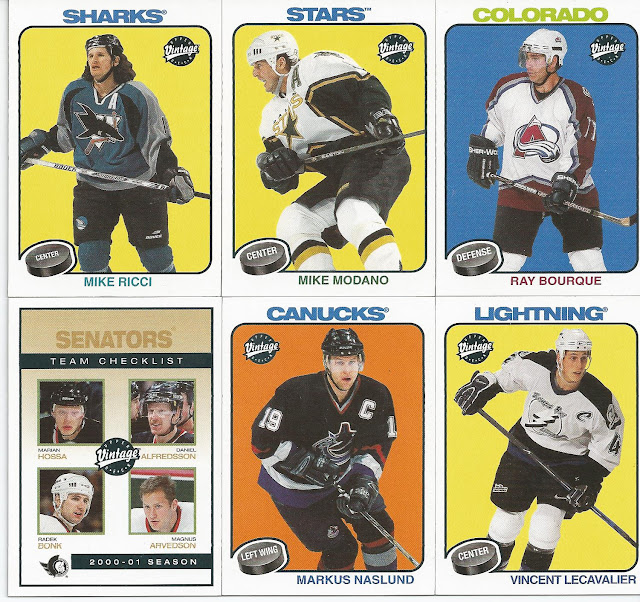 Not a surprise that a few of the remaining cards feature stars such as Modano, Lecavalier and Bourque.  I've always love the four box team checklist cards as well, I really wish that card makers would use these every year.

Another set that I'm slowly inching my way towards completing is the 1999-00 MVP silver signature parallel set.  Similar to the UD Vintage set, the final few cards are of star players.   I picked up 2 more, leaving me with 6 cards to go.   These 2 cards were a little more pricey than those above... 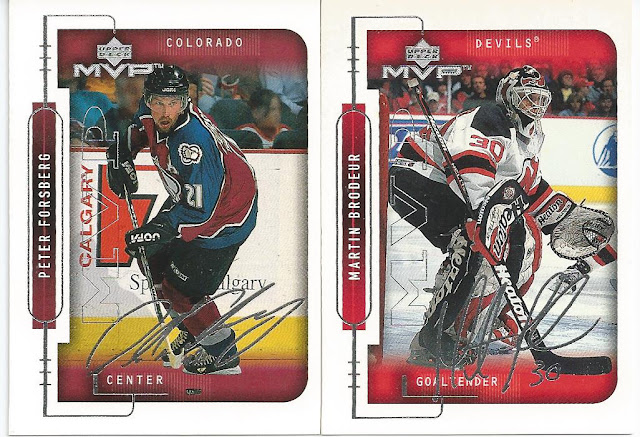 Foppa and Marty.  Forsberg was another great player whose career was derailed by injuries.  When looking at his stats, it shocked me to see that he barely played 700 games in the NHL.  I would have thought that number would have been closer to 1000.

Marty Brodeur will always be the face of New Jersey goaltending for me.  For a generation, he's been in between the pipes, and who knows how much longer he might play.  Jacques Plante played until he was 46, if Martin does that, he'll have 6 more seasons in which to reach that milestone.  Imagine, 6 more full seasons extending all those records that he has?  I would hate to be the #1 goalie in New Jersey once Brodeur retires.  That's a tall order for sure...

I have some other cards that came in from that purchase, but I'll save those for another post.

thanks for reading, Robert
Posted by Robert at 12:01 AM