Electric Ice? It's so hot in Boston the ice is probably on fire....

I started writing this post just a few minutes before the start of tonight's Game 6, anticipating a great Stanley Cup Final match in what is going to be a hot box in Boston.

Let's just say, I don't envy the 40 players that are going to be going full tilt tonight.  Now I know that the ice isn't going to be on fire tonight (I do have some understanding of the laws of physics), but I bet that the atmosphere in the TD Garden is going to be electric.

Speaking of electric, part of my Sportlots purchase last week was 11 Electric Ice parallel cards from the 1994-95 UD hockey release.  These were the first parallel set I ever started to build, and almost 20 years later these 11 cards are probably the first cards that I've picked up since the set was new.

I will not show you all 11, but it worked out great that there's a card from each of the participants in tonight's game.  I can at least show you those.... 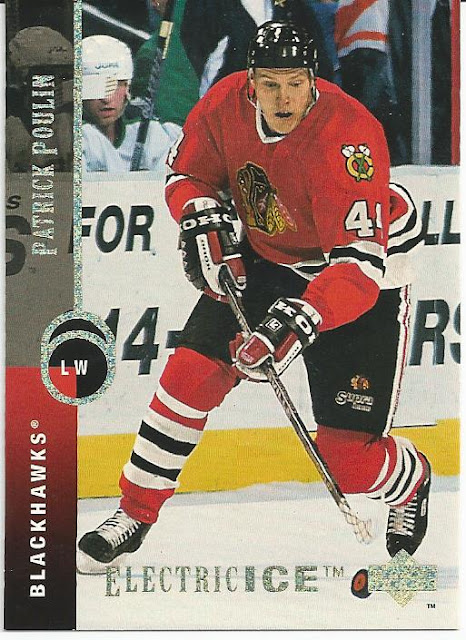 Patrick was part of the 1991 draft class that featured Eric Lindros.  Poulin went 9th to the Whalers, and wound up playing 634 games while scoring just 101 goals in his career.  Just imagine if the Whalers had taken either Alex Kovalev (15th) or Markus Naslund (16th) with that pick instead.

The Bruin that I have to show you is a little more notable... 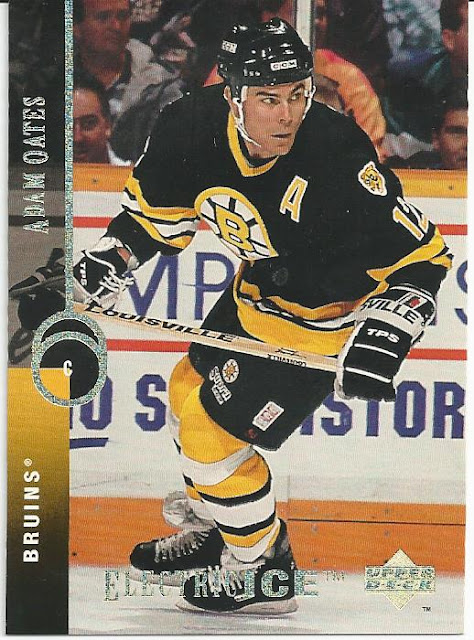 Adam Oates was probably one of the quietest starts in the NHL from the late 80's to the mid 90's.  Being overshadowed by goal scoring right wingers in St. Louis (Brett Hull) and Boston (Cam Neely), Oates quietly racked up the point totals over a 19 year career.  Oates' best season was 142 points in 92-93, and that still was only good for 3rd in league scoring behind Mario Lemieux and Pat LaFontaine.

I miss those days of run and gun hockey, give someone 142 points next year, and I guarantee that he'll lead the league in scoring by 30 points.

I still have a long way to go to complete this parallel set, and with a lot of star cards still to pickup, it's not going to be cheap either.

Not unlike a lot of other things in one's life, you always remember your first.

Thanks for reading, Robert
Posted by Robert at 8:19 PM