Yep, you've all seen it on the web, the TV (although the NHL network here in the US has had no news at all about it) and on all the tickers at the bottom of your favorite sports channel's screen.

I think the fact that I had to wait over 100 days for the millionaires and the billionaires to figure it out has got me bummed out.  I thought that it wouldn't bother me, because we've been through it before and everyone knew it was coming.   But the no hockey on Saturday nights, well that really hurt.  When you've watched hockey almost every Saturday night during the winter for the better part of 35 years, you kind of get used to it.  When someone takes it away, it leaves a hole there that nothing else could replace.  I probably will not get psyched up for the season until I start watching some games, thankfully that will be within the next 2 weeks.

I wasn't bummed out enough though to pickup a box of Score hockey last week while at Target.   I had actually forgot about the box while ripping through the "best of 2012" box last week, and the Score sat until Saturday.  I fared quite well with this box, starting with the Retro Franchise insert of the "China Wall", Johnny Bower.

Bower is the last goalie to lead the NHL in goals against average for 3 consecutive seasons.  It might be quite a long time before someone duplicates that feat.


These Net Cam inserts are pretty cool to look at, but my groin twinged when I saw this photo.

With the NHL able to end 2 contracts per team this upcoming summer, if Roberto Luongo isn't traded by the Canucks, he's sure to be let go.

Old is new again, and the Team Score inserts also feature some great photography.  Jonathan Quick better be ready this year, everybody is going to be gunning for the champs!!


Finally, I've opened about 5 blaster boxes of Score so far this year, but hadn't come across this version of "The Franchise" insert set as of yet. 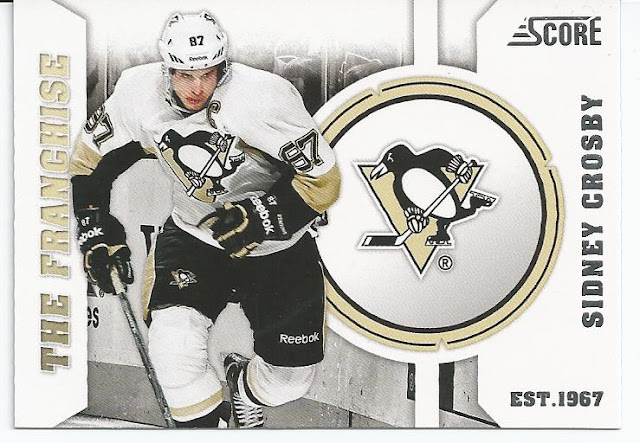 I like the 'Est. 1967' moniker on the lower right of the card. This version of the Franchise insert is a sharp looking card, and if anyone pulls the Phil Kessel Franchise card, I'd be interested in trading for it.


I've enjoyed ripping the Score boxes so far this year.  Price wise, they are right up my alley.  $10 for 11 packs with 7 cards in each is a great price point for me, and so far I've not been left wanting in any of the 5 boxes.  There aren't a lot of hits to chase after, but to be honest, at this price level, I don't expect any.


There's bigger fish out there if I want hits.