Sometimes when you don't know what to write, just say anything

On a cold evening here in western PA, I sit at the computer and realize that I can't put two coherent thoughts together in order to form a post.

So, here goes nothing...

It was good to see today that Upper Deck followed Panini's lead of a few weeks back and cancelled some of their "mid season" hockey products.  I was kind of surprised that they actually cancelled Series 2 of their base set, but it really does make sense since the NHLPA decided to not allow the use of any new rookies in this years products.  Upper Deck also stated that they had limited their early season products (O-Pee-Chee, Series 1, Artifacts, Black Diamond, Game Used) with the uncertain labor climate.

For me, that spells good news, since I will not have to spend as much to chase down the Series 2 set.  For now, that leaves me to enjoy cards such as this one of Tyler Seguin... 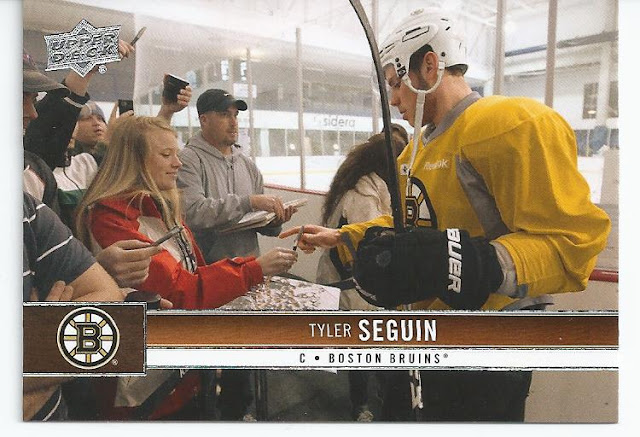 I've always expressed my admiration for cards that feature a player signing autographs for the fans.  It's good to see that young and upcoming stars such as Seguin actually "get it".

On a totally unrelated topic...what are your thoughts on graded cards?  To be honest, you will never see me ever send any card to a grading service ever again.   I did it once a few years ago, and the result was less than flattering.  The card I sent at the time was a Martin Havlat RC (don't ask me why...), and while the card was graded a Mint 9, the return package and the case were pretty much destroyed during return shipping.  Soured me on the experience forever.

I now own two graded cards.  One was one in a contest a while back (79 Topps Eddie Murray), and the other was sent to me recently by Pat at the Hot Corner Cards blog.  An interesting choice of cards for sure.. 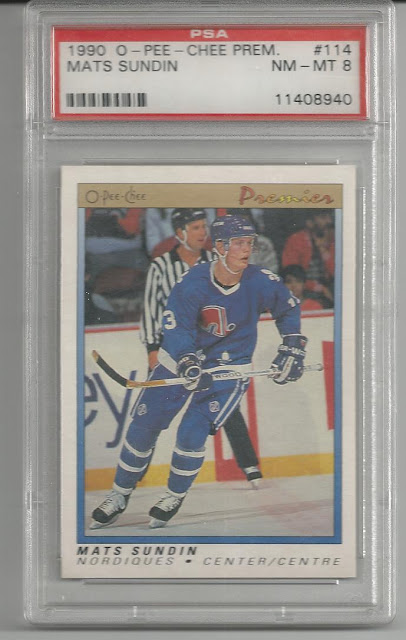 A graded Mats Sundin RC from 90-91 OPC Premier.  One of my favorite players on the Leafs over the past decade, and his best RC, encapsulated forever.  Another odd coincidence is that both graded cards are NM-MT 8's.   Thank you Pat!

Now that I think about it, I should have bragged about getting my cable internet & router hooked up this evening....OK, maybe not...

thanks for reading, Robert
Posted by Robert at 12:01 AM