Fixing a couple of mistakes

I've mentioned in the past my love for the 83/84 and 84/85 OPC hockey sets.  I also mentioned the stupidity (at least perceived stupidity in my eyes) of selling those classic sets away.

My last eBay purchase of 2012 was the start of correcting those past mistakes. I found a pair of 25 card lots from the same seller, 1 for each of the two sets listed above, and after a couple of weeks of waiting, the resurrection has begun. 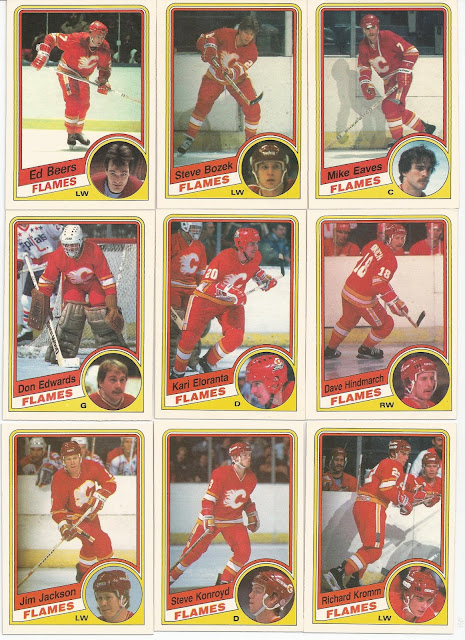 I really do enjoy when card companies number their cards by team.  The 84/85 set is a good example of this, the Calgary Flames that you see above are all in numerical order.  One better, the cards are also numbered alphabetically by the players last name.  What's even more ironic is that OPC knew that (Ed) Beers comes before everything (and everyone) else.... 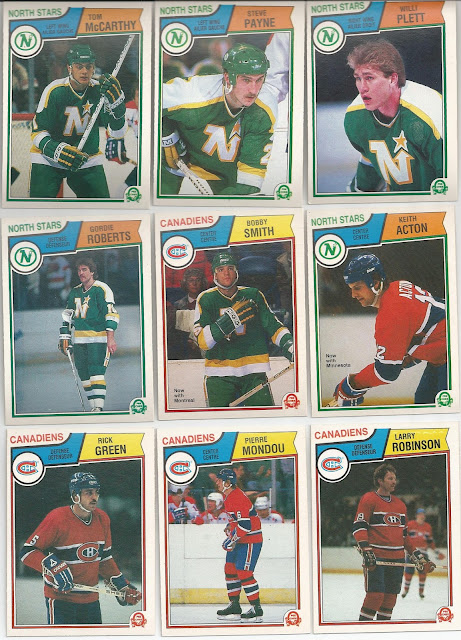 Although the scan isn't the greatest on the 83/84 cards you see here (the Plett and Payne cards are not miscut for example), the cards are still in great shape, and the numbering pattern is similar to the 84/85.

The seller also sent me both lots in numbered groups...the 84/85 cards were in the mid 200s and featured the Flames and the Capitals primarily.  The 83/84s were the same numbering pattern, but featured the Canadiens, North Stars and Rangers.  Even though the auctions listed the cards as all commons, as you can see I received some minor star cards such as Larry Robinson, Bobby Smith, and a few goalie cards (which have their own pricing level that I have always found interesting, I'll feature a post later on this week to discuss).

These aren't the only 80's sets that I plan on putting together in the near future.  Another gem, that I always believed was under appreciated was the 82-83 set. 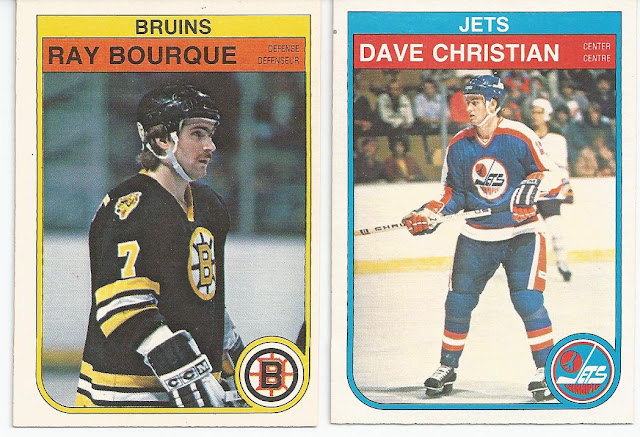 As far as I can tell, these are the only 2 82/83 cards that I own.  Love how the bars at the top with the team name and player name feature the club's primary colors.

The last one that I will be taking a shot at is another design that I like, the 86/87 OPC set.

I only have 8 of these in my collection, but the 86/87 set is one of those that looks great and has always been in my radar.  I've just never gotten around to chasing it down.

With my renewed addiction to 70's baseball and 80's hockey, the foreseeable future should be quite entertaining to say the least.  Finding cards of names that I haven't heard in 20 or more years is sure to bring back a lot of memories.

That's the reason that my focus has shifted more towards vintage.  Moving forwards by moving backwards.

Yea, I know, it probably only makes sense to me....

thanks for reading, Robert
Posted by Robert at 1:28 PM