Starting to get the desk cleaned off

I didn't mention it at all during yesterday's "resolutions" post, but one of my goals for 2017 is to keep my desk clutter free.  That means keeping the piles of cards that tend to gather up over time put away in their proper place.

That also means posting.  That's right, the sooner I post the cards on the blog, the sooner I can get them where they need to go.

I've actually done well so far in the new house, there's only a few small piles on the desk.  The caveat there is I've only been in here 5 months, so I haven't had a lot of time (or packages) to leave cards unattended.

The biggest project going right now for me is the hockey version of SNI.  With about 40 cards on my desk to post, it's a bit of a challenge for me to get posts going using a theme.  I decided for today to combine cards from a trio of bloggers who were generous enough to send me cards before the holidays. 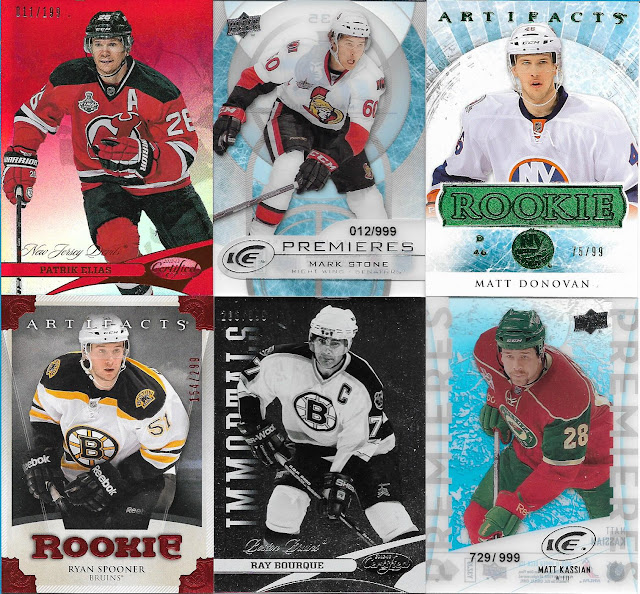 The first batch of 6 comes from Jim at the newly created cards as i see them blog.  (Sorry I couldn't remember the name on my video post Jim, it just proves that I need to be better prepared for the videos!).  Favorite card?  Ray Bourque of course.  Love getting the veterans/star cards for this set, and seeing Bourque was an instant winner for me.  Patrik Elias isn't far behind,  having played for the Devils since '95-'96 (!) and winner of 2 Cups.  This group also knocked out 3 more cards that are #'d below 100, a task that I thought might take some time, but isn't appearing to be that way.

This trio is courtesy of Doug (Ranford on the left) and Dave (Sakic and MacKinnon) on the right.  I had showed on my video post a card of Sergei Varlamov from Dave, but alas that turned out to be a dupe, so instead of putting the Sakic into my PC, I decided to add him to the SNIH set instead. 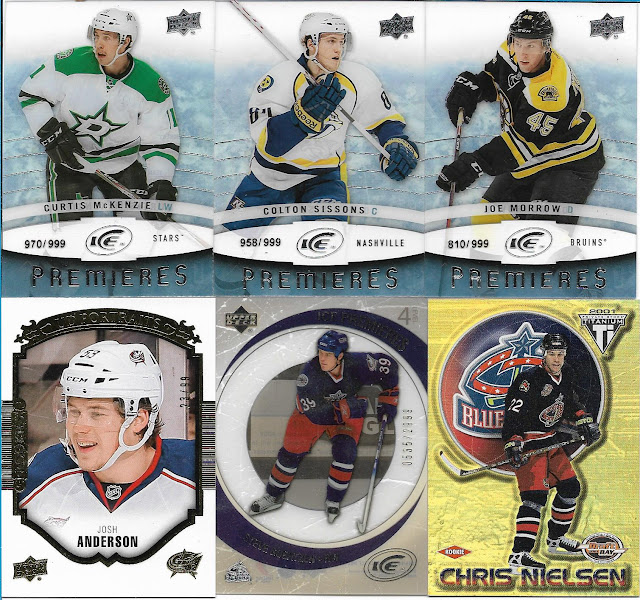 Here's 6 more from Doug to round out the post.  Three more Ice Premieres from 2014-15 (there must have been a fire sale on these...), at least I've heard of 2 of the 3 so far.  The bottom row was easy to put together, as I had to mention the Columbus Blue Jackets, who are hotter than any team I've seen in quite a while, winning their last 15 in a row.  I had actually picked them last year to start doing bigger things, only to see them go quickly into the tank at the start of the season.  The Chris Nielsen card is the key card in this post, as it becomes the leader of the pack (so to speak) having the serial #1/1000.

Jim, Dave and Doug, as always thank you very much.   Your envelopes are really appreciated!!