I guess they call it Contours for a reason

I've had these 5 cards sitting on my desk for quite a while now.  I received them before the start of the New Year from Doug who keeps churning out posts at the Sportscards from the Dollar Store blog on a daily basis.

Don't get me wrong here.  I love the look of these cards.  Something a bit different, with the rounded sides and arch at the top of the card.   But boy, was it a bit of an adventure trying to get them to stay straight on the scanner bed... 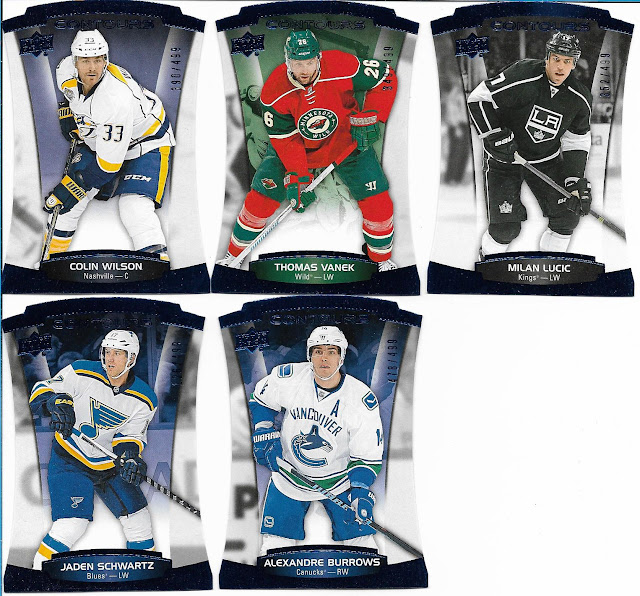 In the end, I don't think I fared too badly with the final scan.  But boy oh boy, was it tough to settle these down, especially the upper row since I use the top edge of the scanner to line up the cards when I scan.

I love the blue serial numbers and borders (top and bottom).  The word "Contours" is almost impossible to see however, and the Upper Deck logo scanned quite dark.   No matter, as my favorite part of these 5 cards is....I've heard of everyone of these guys!

The Serial Numbered Insanity set, hockey version, is coming along quite nicely.  I'm up to about 10% now (I've almost got everything scanned and displayed), and all but one of the teams has been represented so far. (Hurricanes, where art thou?)

It's progressing a lot quicker than I thought it would, but that's what is great about the blogosphere.  Just when you think you have it figured out, people start firing stuff at you that you don't expect.

Maybe expect the unexpected should be my thought process going forward.

Thanks for reading, Robert
Posted by Robert at 10:23 PM