The annual homage to one of my favorite releases, the Upper Deck hockey set.  I participate every season in the ritual that is buying a few packs, chasing the rookies in the Young Gun portion of the set, and drying away the tears when I end up without any yet again.

But, I always love the photography, and the set design is usually sharp enough to keep me entertained.  This year is no different.   I bought 5 packs last week at Target on the day I started getting sick, and I'm finally getting around to posting them on the blog. 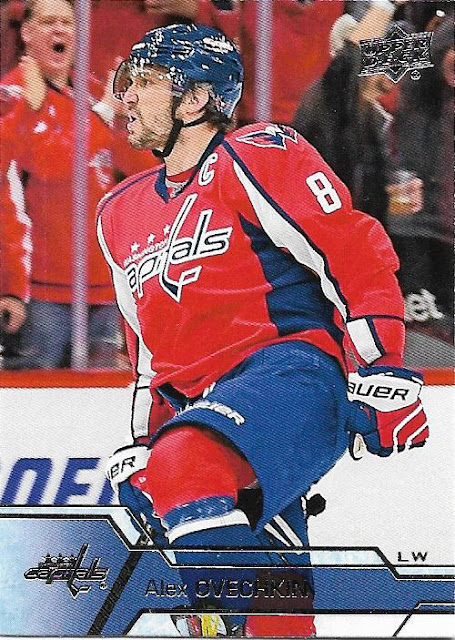 Pack 1 of 5 had nothing to speak of, save for the Alex Ovechkin base card.  I will stop and watch a Capitals game if I see it on TV,  in hope of seeing one of Ovie's howitzers hit the net.  First year HOFer in my book. 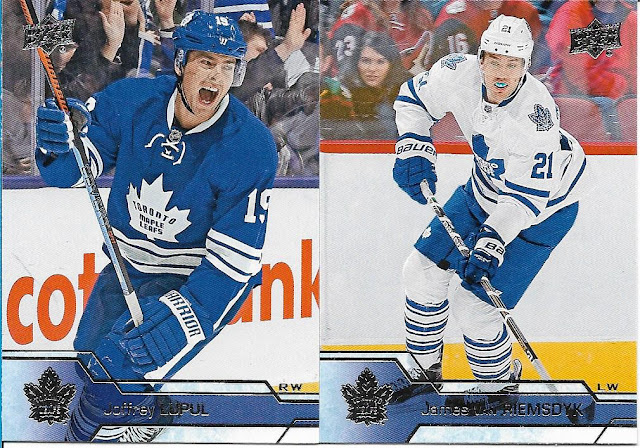 The base set pickups of the Maple Leafs will be relatively easy again this year, with two of them being pulled in pack two.  While James van Riemsdyk on the right is one of the core Maple Leaf players (interesting that the photo was taken in Phoenix), Joffrey Lupul appears to have played his last game in a Maple Leaf jersey.  Must be nice to have that kind of money to burn... 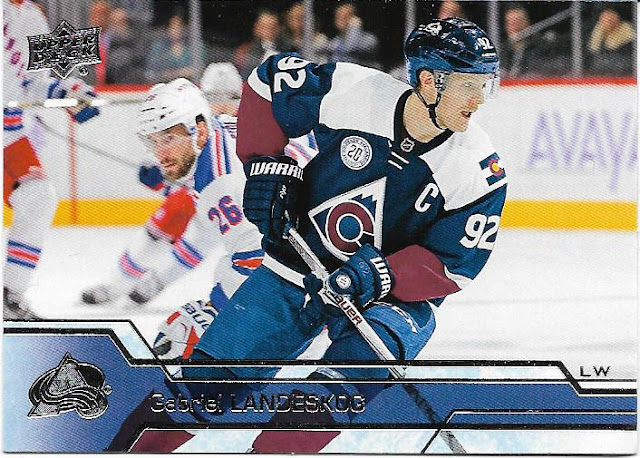 I've always been a big fan of NHL jerseys, I have quite a few of them in my closet.  One day I would like to own the alternate Colorado Avalanche jersey that is shown he on the Gabriel Landeskog card.  Takes me back to the Colorado Rockies jersey from the late 70's.   Love it!! 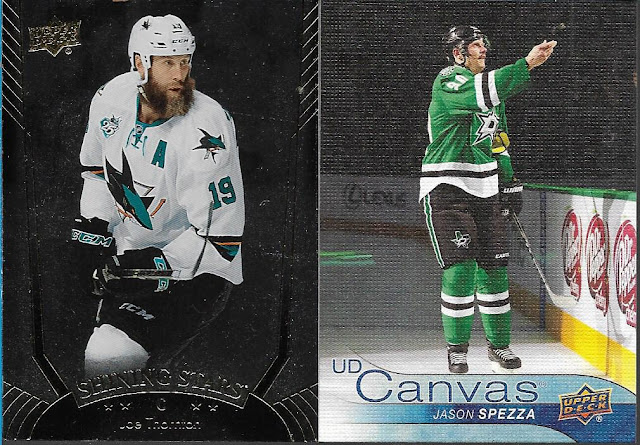 These were the only 2 inserts I pulled in the 5 packs that I bought.  Jumbo Joe Thornton featured on the Shining Stars card on the left, and the UD Canvas cards are represented by Jason Spezza from the Dallas Stars on the right.  Both will likely be sent off to COMC to be sold in the marketplace. 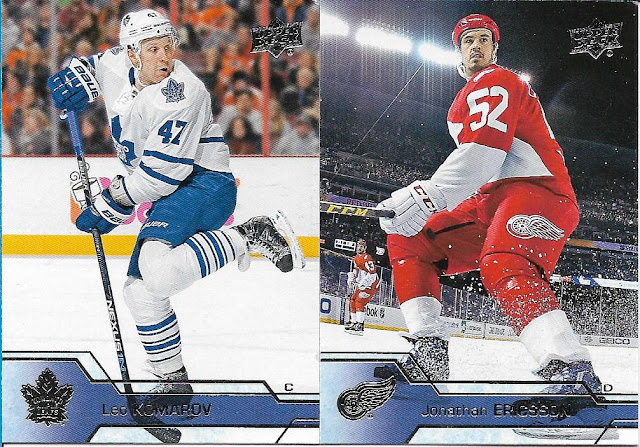 I've always been a big fan of grinding type forwards that like to hit and don't score a lot.  Leo Komarov fits that description to a 'T'.  Not that the graceful skating on one leg depicted on his card would signify.  I saw the Jonathan Ericsson card on the right and thought to myself "boy the numbers on his jersey are huge!!"  Forgot that they had these uniforms for their outdoor game last season against the Avalanche.  Guess when you're that far away from the ice in those football stadiums that the numbers need to be big so you can see them.

As usual, no luck with pulling any of the Young Guns cards, and chances are that the 2016-17 set will not be something that I chase.  The cheapest copy that I saw of an Auston Matthews RC was $110, I also saw another auction that was selling a pair of the RC's for $275.   Yikes.  Even the oversize box toppers of Matthews are going for about $40.  This may be one of the best RC classes for quite a long time, and also one of the most expensive.

I've got other, more pressing collecting needs at this moment, which hopefully this weekend's card show will help alleviate.

Thanks for reading, Robert
Posted by Robert at 9:45 PM