My first Just Commons order with a bit of a twist


I recently read on the Off Hiatus Baseball Cards blog about Tony's purchase from the justcommons.com website.   I decided to give it a go, and proceeded to place an order for 59 Jays cards, as I was trying to pare down that massive list a bit.

Completing the order was pretty harmless, and payment was easy, so I proceeded to wait roughly a week for the cards to come.

It wasn't my order though.  The folks at Just Commons had sent me someone else's order.  When I opened the envelope, I was taken aback for a minute, because I didn't remember ordering cards from the '64 Topps set.  Sure enough, there were 3 very nice EX-MT cards in there.  What was interesting is that the remainder of the order contained a healthy stack of 2006 Topps, mixed in with a few Heritage cards from the late 2000's.  I thought that I was the only one who mixed vintage cards in with stacks of newer (relatively) product.

It was a Thursday I believe, and I really couldn't do much about the mix-up at the time, so I decided to wait until Saturday before contemplating what to do.

The next day, my cards came.  So what I decided to do was send the cards from the first envelope back to Just Commons, instead of sending them on to the actual owner (his information was in the envelope on the order sheet).   For me, this made sense because I figured that sending them back could allow for the site to fix their mistake, instead of sending them to the end customer and having them potentially deny that they ever received them.

I was able to send the cards back this past Saturday, which made me comfortable enough to show off what I had actually ordered.  I'm not going to show all 59 cards, but I'll give you a healthy dose of Blue Jays on this post. 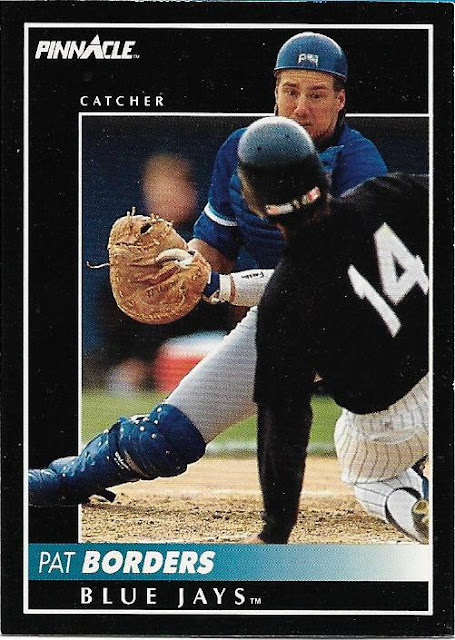 I thought only Panini produced cards without logos...that's the first thing that struck me when looking at this '92 Pinnacle card of Pat Borders. 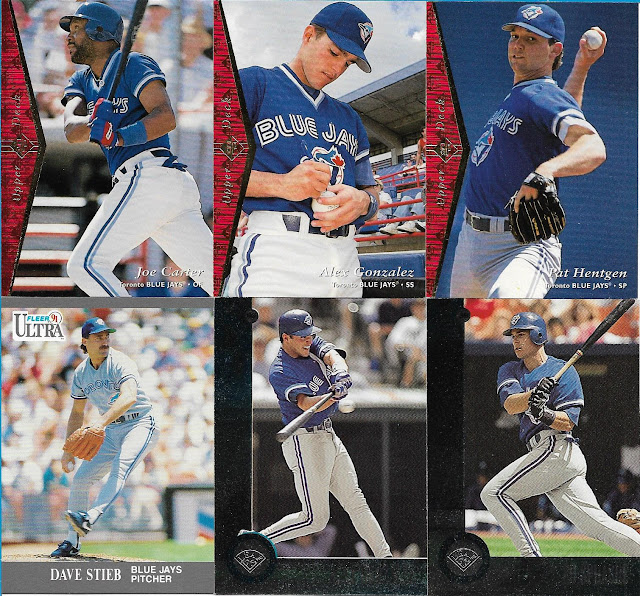 We'll start a few six packs off with a trio of sets that are no longer on the want list.  I only needed the one Fleer Ultra from '91 for the longest time, and now Dave Stieb is finally part of the collection.  Only needed a couple of '96 Leaf cards, now I have 'em.  Love the SP releases that were a staple of Upper Deck in the mid 90's.  That's another set that I crossed off.... 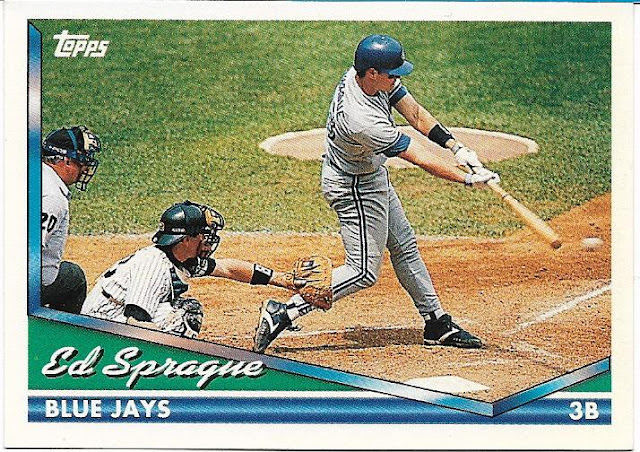 Skipping the six packs for just a second, had to show off this great horizontal shot of Ed Sprague from '93 Topps.  Fantastic shot of Ed making contact! 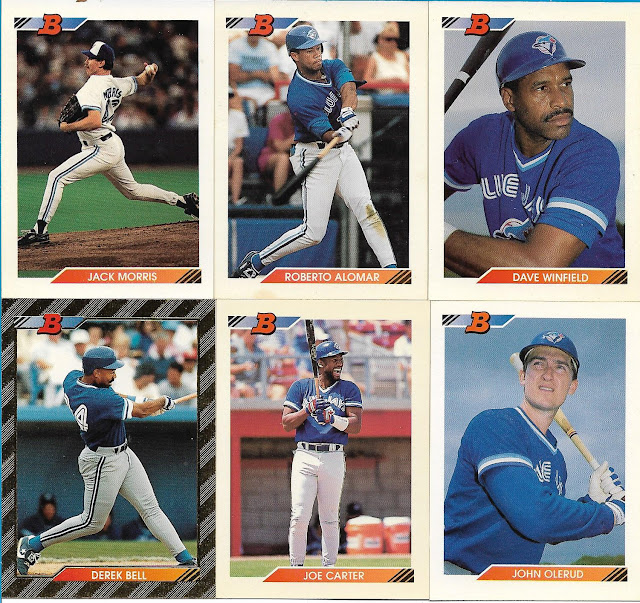 Grabbed 6 '92 Bowman cards, but still need 3 more to finish off that team set.   I keep forgetting that Jack Morris joined the Jays for the '92 season.  The gold Derek Bell border did not scan well at all, it looks more gray than any other color. 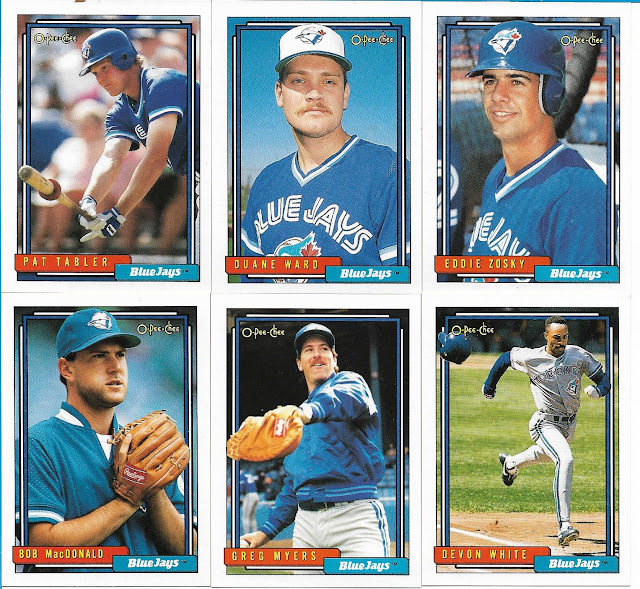 Wow, the O-Pee-Chee lists from the early 90's are still huge!!  Imagine that, another shot of Devon White losing his helmet while running the bases.  It's a wonder there weren't more concussions back then with guys losing their helmets while running or sliding into bases.

Shiny goodness.  I still have a hard time remembering that Topps Chrome had a set as far back as '97.  I know there's a couple of Carlos Delgado collectors out there, I wonder how you guys do it as it seems he has like a bajillion cards. 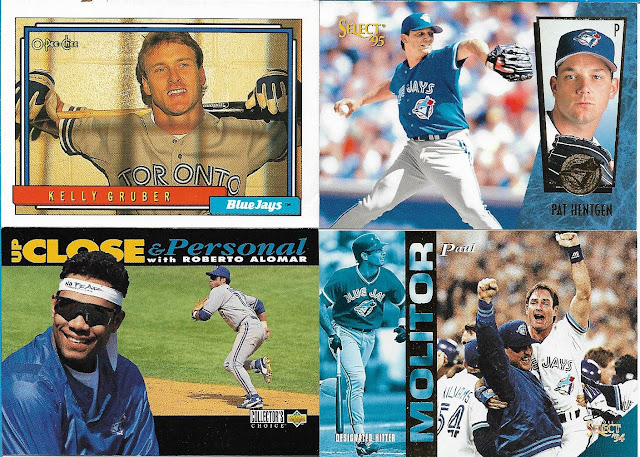 Horizontal for a little change of pace.   Wondering if Kelly Gruber was in a jail cell somewhere when they took this picture for his '92 OPC card.   Love the shot in the lower right of Molitor celebrating what I'm hoping was their World Series win in '93.

See what I mean?  More Delgado!!  I never really thought that I would find a whole lot of cards of Carlos in catcher's gear, but here's two more examples...wonder how his career would have been different if he had stayed behind the plate.

Even with the little mix up, I'll definitely give the Just Commons website another go.  The prices were reasonable and the shipping was quick.

Hopefully next time I'll only get what I asked for....

Thanks for reading, Robert
Posted by Robert at 8:59 PM