I was home before noon today, had to make sure that I was out of work and off the roads by 3PM as the county I live in ordered everyone off the streets by that time.

Since then, I've been inside the house, waiting for things to happen.  The first heavy band of rain hit shortly after 3, and the Mrs. and I closed the storm shutters on the back patio and hunkered down, waiting for something to happen.

So far, we've been lucky.  So I decided to take the time this evening to write a post while we still had power (I'm waiting for the winds to pick up and knock it out...).

With no incoming cards on the horizon, and the prospects of the monthly card show this weekend looking rather bleak, the only thing on my plate right now is getting the Blue Jays collection sorted and cataloged.  First step, taking the 5 row monster box of cards and sorting them into decades.  Going through the box has been an interesting process; I've found cards that I'd forgotten I had, which of course slows down the process because I have to stop and look at them, like any good collector would.

Thankfully, there's only 5 piles of cards, 70's through 10's.  So to generate a post I decided to grab one card from each and babble about it a little. 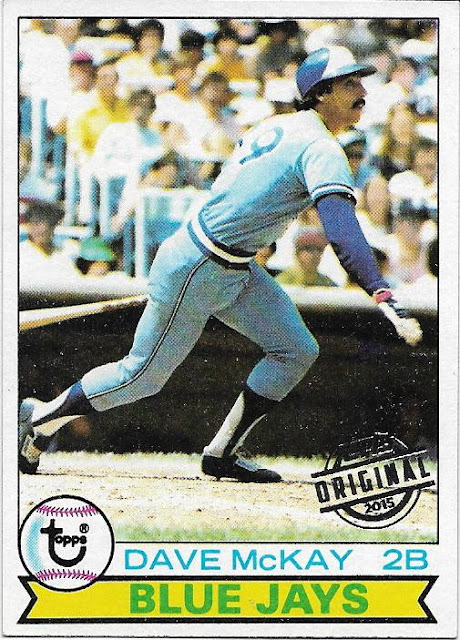 1979 Topps Dave McKay #608.  Yes it has the buyback stamp on it from 2015, but I still consider it a '79 card no matter when it was purchased and branded.  Dave has had quite the career as a base coach in the majors, spending over 3 decades as a first base coach for the A's, Cardinals, Cubs and Diamondbacks.  Jays fans will remember that Dave was in the starting lineup for the team's first ever game against the White Sox.  Dave would go 2 for 4 with a RBI in that memorable 9-5 win. 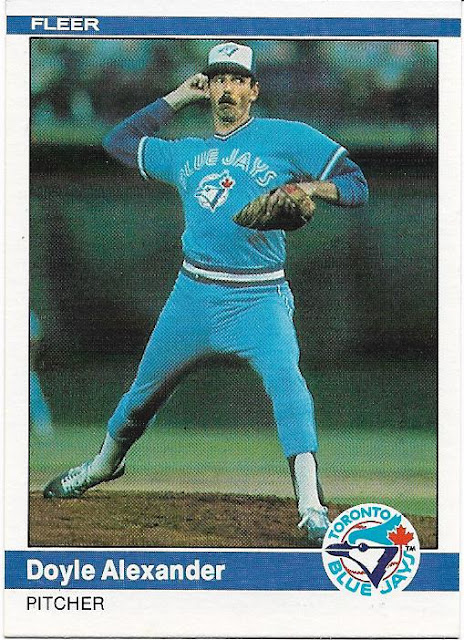 I'd almost forgotten the powder blue track suits that the Jays wore in the 80's.  It looked really funny in combination with expression on Doyle Alexander's face in this 1984 Fleer card #146.  Doyle was a free agent pickup for the Jays in '83 after being released by the Yankees, and helped the young Jays pitchers during the pennant chase that year.  Doyle would go on to win 17 games in each of the next 2 seasons for the Jays before being traded in '86 for eventual closer Duane Ward. 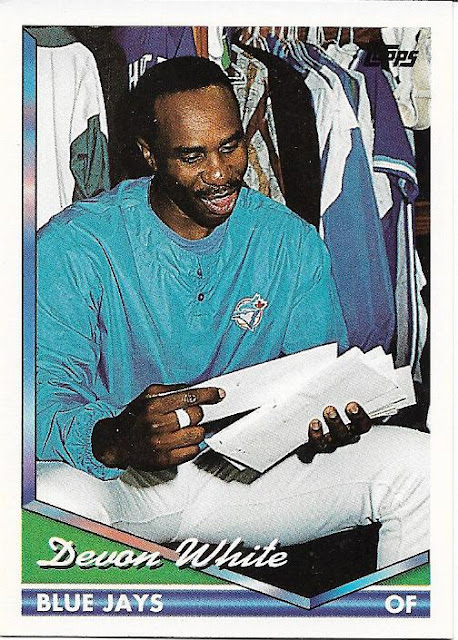 Dig the fan mail that Devon White is checking out on his 1994 Topps #511 card.  Devon would join the Jays in 1990 in an off season trade from the Angels.   "Devo" would be the center-fielder in Toronto for the next 5 years, and be an important piece of the squad during their 2 World Series titles.  Interesting note on the back of the card; during Devon's 1000th career game he tied a record by recording two outfield assists in the same inning. 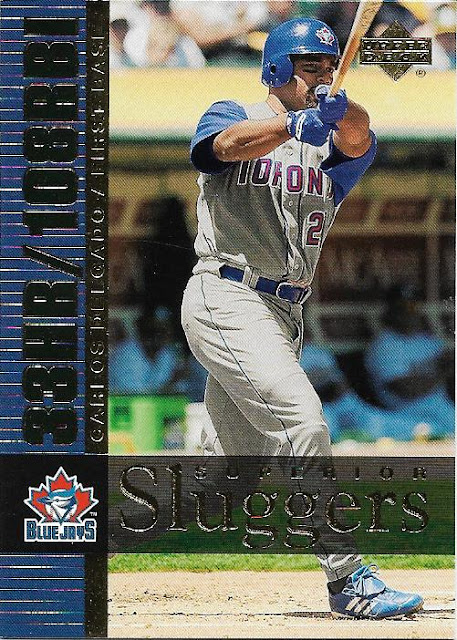 Being the numbers geek that I am, I was instantly attracted to this Carlos Delgado card from 2003 Upper Deck.  UD compared the 33HR/108RBI stats with his previous two seasons, and the other seasons were more noteworthy.  The 2000 season was especially dominant, with 41 homers and 137 RBI's.  Carlos also hit .344 that year and played in all 162 games, yet only finished 4th in MVP voting.  I guess I shouldn't complain, Pedro Martinez went 18-6  with a 1.74 ERA and finished one spot behind Carlos.  Jason Giambi won the MVP that year btw. 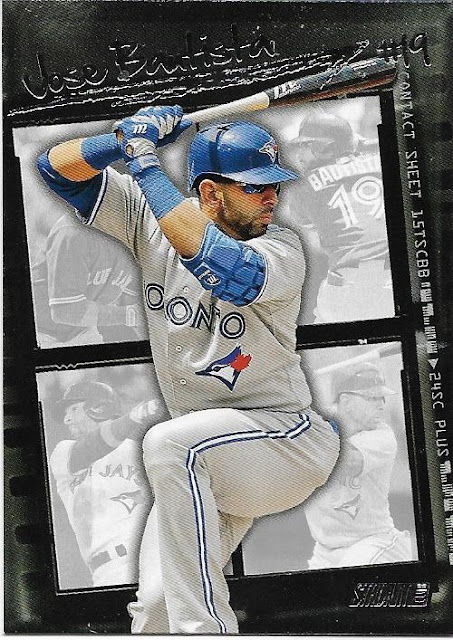 With all the colorful parallels and shiny cards that the '10s has brought us, I decided on showing this 2015 Stadium Club Contact Sheet insert of Jose Bautista.  I liked the font of the "Jose Bautista #19" on the top of the card, the multiple shots in the background remind me of movie frames and the leg kick that has propelled Jose into stardom in Toronto.  Oh, and the 3 run homer he hit today didn't hurt either.  Somebody will give him the $$ he wants in free agency.  It probably won't be Toronto.

Hey look at that, power's still on!  Here's hoping that the first hurricane I experience will be my last for a while.