Trading for some people is as easy as ACB

It's great when new card blogs start up.   It gives us a fresh new perspective on what we love to do, drown ourselves in cardboard images of overpaid (modern) or underpaid (vintage) athletes.

Naturally, when anyone new comes aboard, you are provided another opportunity to begin another trading relationship.  I was afforded this opportunity by Julie at the newly minted A Cracked Bat: Baseball Cards and a Hot Dog blog.

Julie offered up a bunch of Blue Jays cards for the promise of the return of some Tigers her way in the (hopefully) not too distant future, and of course I can't resist that kind of deal.  When I received an envelope earlier this week with the return name of A.C.B. in the upper left corner, the fog rolled into my brain and I wondered who was sending me an envelope.  Once I realized the initials stood for A Cracked Bat, the fog lifted and I began to dig through the goodies.

A lot of cards were in the envelope, putting a dent into some of my want lists.   It would take me a long time to scan them all, much less go through them in any kind of detail, so I decided her envelope would get the 5-4-3-2-1 treatment. 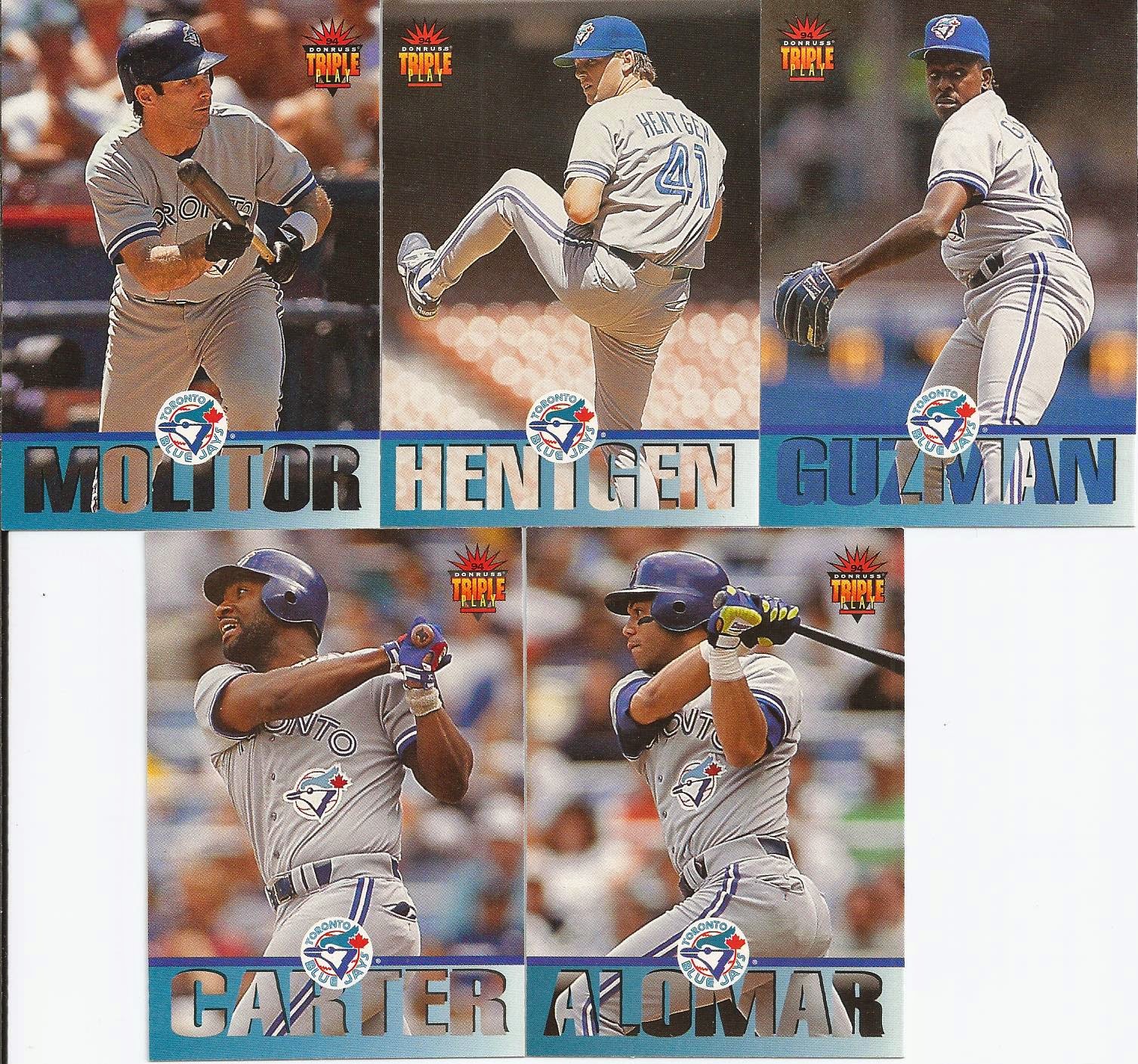 I wasn't sure if I had any '94 Donruss Triple Play in the Jays collection, so I had to refer to the spreadsheet to see if there were any (I had 2).  I like the idea of the name being transparent to allow a little more of the photo to come through.  There were 7 of these in the envelope, reducing the want list for this set down to a couple. 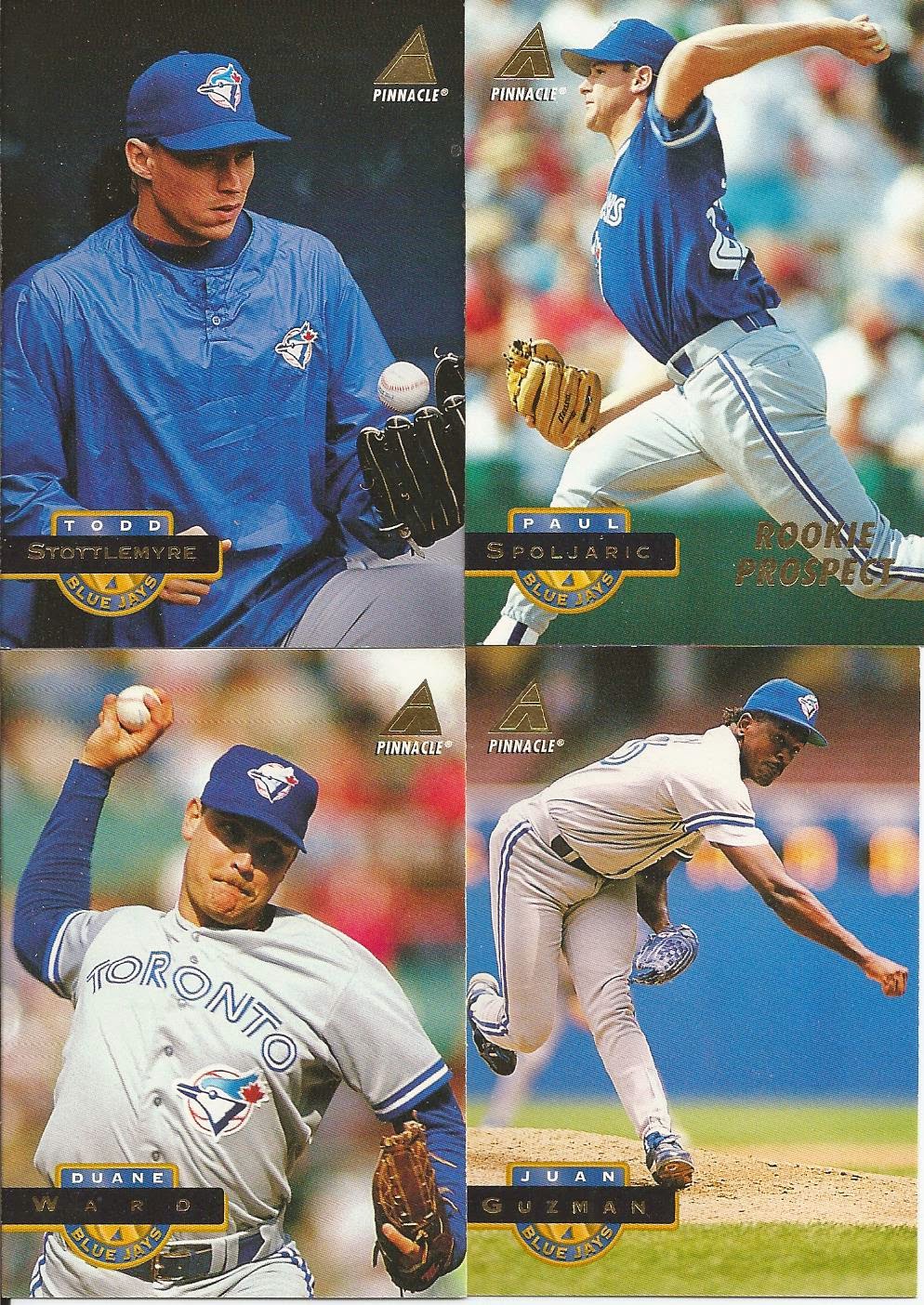 I decided to throw 4 pitchers on the same scan for the '94 Pinnacle cards.  There were quite a few of these inside, 15 to be exact. Once I update the want list for this set, there should only be one or two cards left.   I saw the Paul Spoljaric card, and decided to take a look at his stats.  Paul didn't have a spectacular career, only 6 years in the bigs, finishing his career in 2000 with Kansas City.  It's always great to take a quick look at a Canadian who made the bigs and played for a Canadian team.   Paul's career was likely cut short because of his control, 5.3 walks per 9 innings makes it difficult to stay on a roster.

I had to take a look to see if I had any of these '95 SP Championship Series cards in my collection.  I didn't, so these are new to me as well.  I like these cards; without the standard SP logo cutting off a portion of the card, the photos are that much better.  I would say I prefer these over any of the other SP releases (except for maybe 1993). 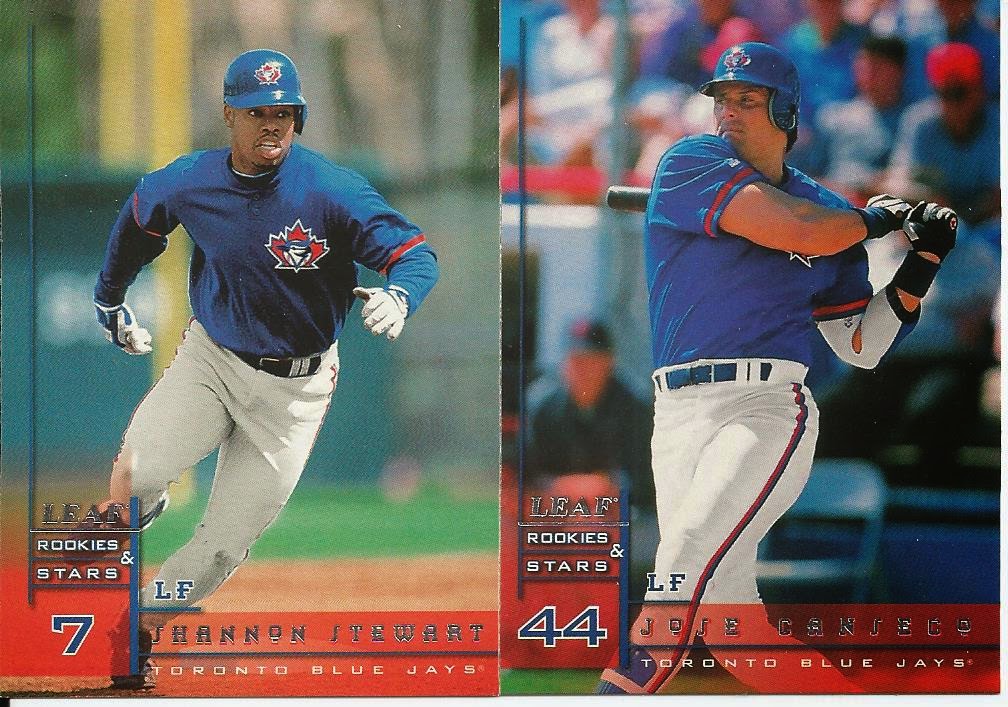 '98 Leaf Rookies & Stars.   Again, similar to the '94 Triple Play above, the bottom stripe is see through so you can see all of the picture.  I'm slowing working my way towards a Jose Canseco page to show off, not bad considering he only spent one season north of the border. 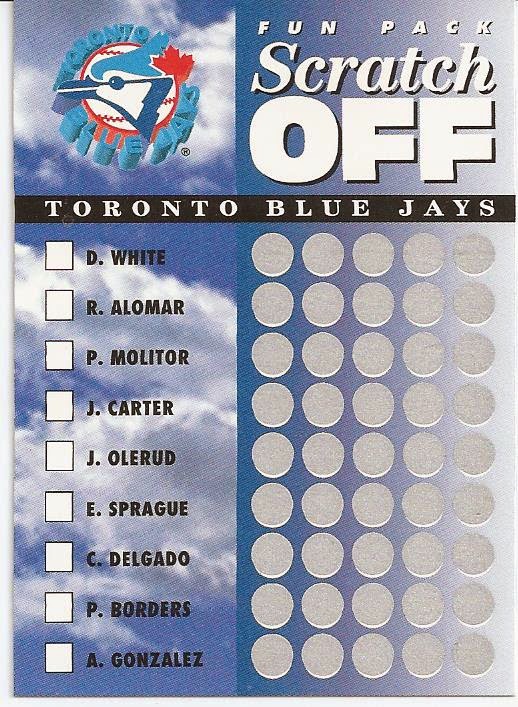 Man, I missed a lot of fun stuff when I stopped collecting in the 90's.  I had to do a little research when I saw this to see where it came from.   Upper Deck created fun packs in 1994 and these scratch off games were in them.  I even found a Blue Jays scratch off card on eBay, PSA graded no less!!  I even like that the order of the players on the card resembles an actual Jays lineup from that year.

A great envelope indeed, thank you very much Julie for the cards, they really are appreciated!!