I've watched enough TV during my lifetime to have heard a few times about the 405 highway in California.  Doing a quick Google search found me an old article from a few years back showing that the 405 was the busiest Interstate in any US City.  If you click on the link you'll see photo evidence of why that's the case.

Lately I've been quite busy on the TCDB website and passed the 400 transaction milestone; with a couple trades that I received this weekend I'm now sitting at 405. 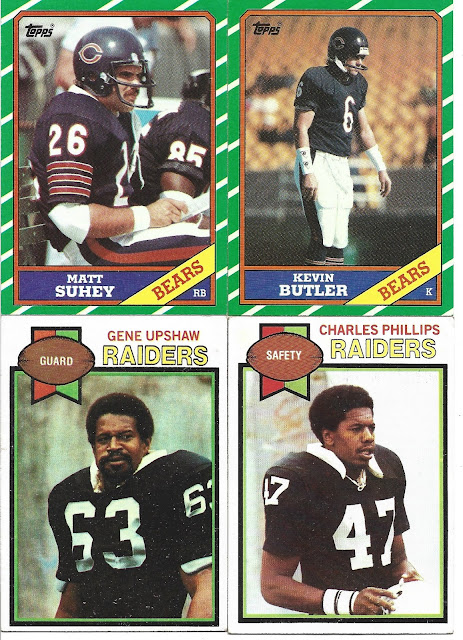 Both of these were on the small side, I traded away a few early 80's baseball cards to get 2 cards closer to each of the 86 and 79 Topps football sets.

The '86 set has moved along really quickly as I'm down to just 31 cards (10 RCs including Rice and Young) to finish the set.  Had no idea when I started the set in 2020 that I'd breeze through the set as quickly as I have.

The card that stands out for me on this 2nd trade scan is the Larry Fitzgerald.  It is the base card from the 2009 Topps set.  I know that the baseball design is not similar, but I think this design could be a good one for Topps to use/reuse in a future baseball set.

Slowly but surely the Prizm hockey set, one of my Next 10, is being whittled away.  I have a few of them in my current Sportlots box and the want list is down into the 30's.

The John Olerud PC has grown quite a bit during my lack of posting so far in 2021.  This Leaf card from the '97 set brings the total to 262.  The Olerud collection is climbing up my list of PC's with help a lot of my recent trades, including one where I received 15 Olerud cards!