You can't spell Thursday without TY

A few weeks ago Joe, who sells under the Cheap Cards moniker on Twitter, posted this T.Y. Hilton card for sale. 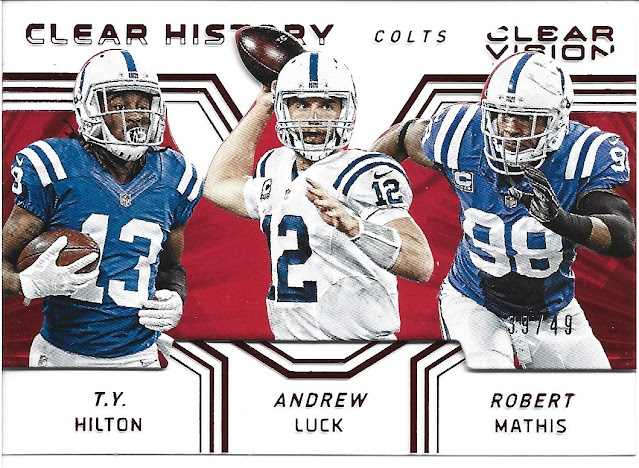 I don't add a lot of cards to my player PC's now a days, but for $4 I quickly jumped on this card from 2016 Panini Clear Vision.  Serial #'d to just 49 copies doesn't hurt.  The red version is one of 7 different colors available, likely ones that I won't chase but will grab if they come my way such as this one did.

T.Y.'s teammates on the card are already both retired; Mathis left football after the 2016 season which was his 13th in the league, while Andrew Luck left 2 years later after just 6 years in the league.

It'll be interesting to see how Hilton fares in 2021 with another new quarterback as Carson Wentz joins the Colts after the big trade with the Eagles.  Hopefully they have the same success as 2020 with Philip Rivers as the signal caller.