Close, but no cigar

One of the goals at the beginning of the year was to finish the 2016 A&G set that I'd only had a handful of cards from at the time.

Well, I came close.  I still only need card # 168 (Don Mattingly) & # 296 (Rickey Henderson) to finish the set.  I didn't feel like overpaying for them (my cheapness won out over my desire to complete a goal, go figure) and once the next Sportlots order is made, these two cards will be on it.

Looking at the names of the first 3, I was fortunate to pick them off of COMC for less than 75 cents apiece. 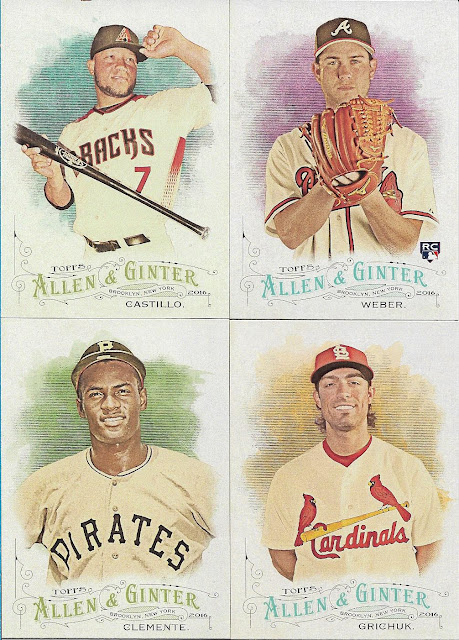 Three of the 4 in this scan didn't have the star power that the other scan possess, however the Ryan Weber card was the most expensive of the bunch, right at 75 cents.  Those rookie cards will get you every time...

Well, I'll grade generously at the end of the year as far as set completion goes, and give myself an A-.

Maybe I'll put together a quick Sportlots order before the New Year to try and get that A.

The next few posts will be devoted to my recent COMC order, as I hit a whole bunch of different want lists.   Some sets, and some PCs will be featured over the next few posts.  It'll be nice to show off some cards for a change.

Thanks for reading, Robert
Posted by Robert at 10:52 PM