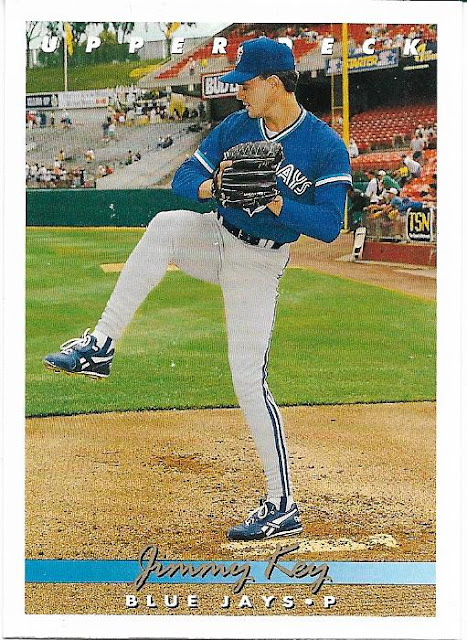 I loved watching this guy pitch.  His delivery was so smooth, there seemed to be no wasted effort at all.  His '94 Upper Deck card kind of gives you the gist of it.  Medium high leg kick and slight twist.  Nothing overpowering in his arsenal, but the ball always moved around.

Things I didn't remember when looking at his career stats: 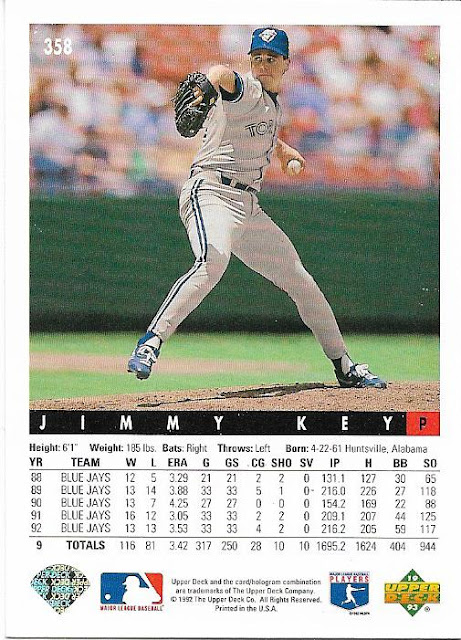 This would be the last year for cards depicting Jimmy as a Blue Jay, as he moved on to New York in 1993 as a free agent.  The Jays would end up replacing him in the rotation with Dave Stewart and would win their 2nd straight World Series.  Jimmy would end up getting a 2nd ring 3 years later as part of the '96 Yankees World Series championship team.

It's been fun so far going through the cards and getting them into a spreadsheet, seeing how many have doubles up to now (there's 19 players with 2 of the same card), and seeing the stack grow.  For those of you that have the Xfinity cable remote, a stack of 400 cards is as tall as the remote standing on its end.

Maybe another couple hundred cards and I'll put them into a box and start dividing them up by year.  I still don't have a card from all 40 years of the team's existence recorded yet, but that should come soon.

thanks for reading, Robert
Posted by Robert at 6:00 PM