I was determined to knock out the one baseball insert set that I've had on the go for a few months now.  I actually purchased the last of these a few weeks ago on the COMC site, but waited until I had a decent enough sized order before pulling the trigger and having them shipped.

So let's look at the last bakers dozen of the 2015 A&G Starting Points set, shall we? 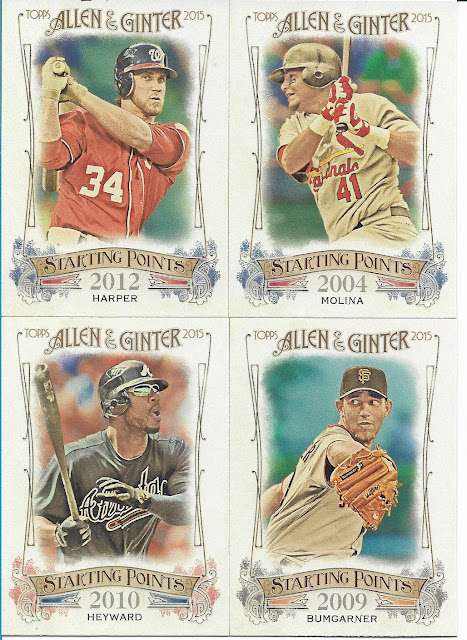 It feels like we've been hearing about Bryce Harper for a decade, but he's only been in the majors for just 5 seasons.  I remember Jason Heyward's name coming up a lot on blogs when I first started blogging back in 2011, so he's been around awhile.  On the back of Yadier Molina's card it documents that on the day that Yadi began his MLB career, Julio Franco became the oldest player to ever hit a grand slam at the age of 45!  Final question.  How well do you think Madison Bumgarner will fare in the World Series this year?  Remember, it is an even #'d year... 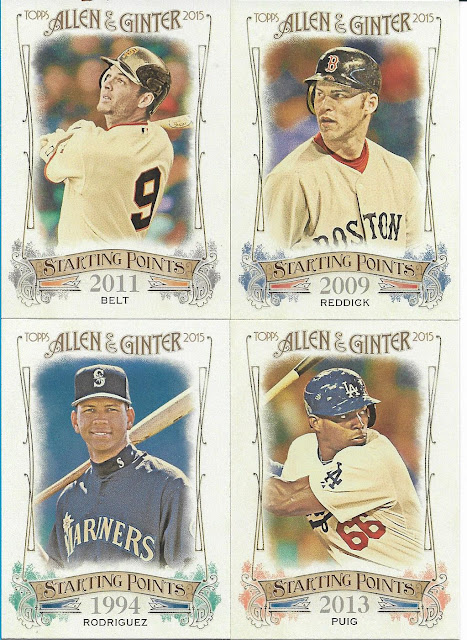 Brandon Belt's card back notes that the day he started his career, Jeff Mathis became the 3rd major leaguer to hit an opening day HR on his birthday.  Showing up ARod:  John Valentin turned the 10th unassisted triple play in MLB history on the day that Rodriguez started his career.  Josh Reddick started his career on July 31st, and his card mentions players that were traded that day, including Jake Peavy and Scott Rolen.

The only player of these five that I was interested in looking at the card back was of course Mike Trout.  Blah...  the one big inning that happened on 7/8/2011 was Boston scoring 8 runs in the first on the Orioles.

Now that the Starting Points set is out of the way, let's look at some hockey!

These 3 cards from the 88-89 OPC set drop that want list down to just 2 cards.  Needless to say that those 2 are the most expensive RCs in the set, Brett Hull and Brendan Shanahan.  I will have to do some hunting for those to see if I can get them on the cheap.

Finally, I'm going to show off 3 serial #'d cards that I found and absolutely had to have. 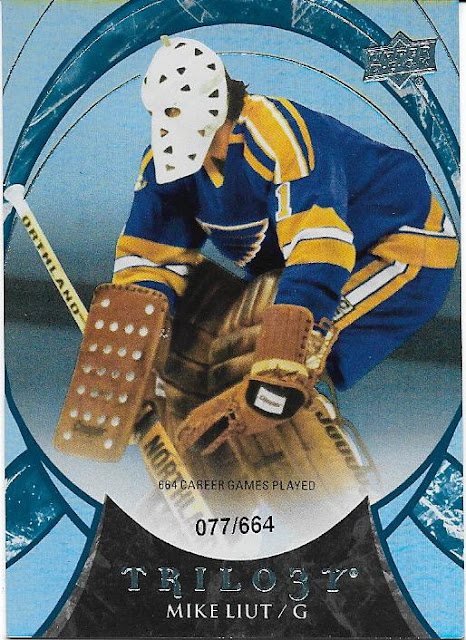 I don't know what it is about Mike Liut, but that mask, as plain as it is, is something that I'm drawn to each time I see it.  The common theme it seems for most serial #'d hockey cards these days is that the numerals are on the front.  I bought a couple of different Trilogy cards, which have different standards for how many cards are published, such as the career games played for Liut.  Different... 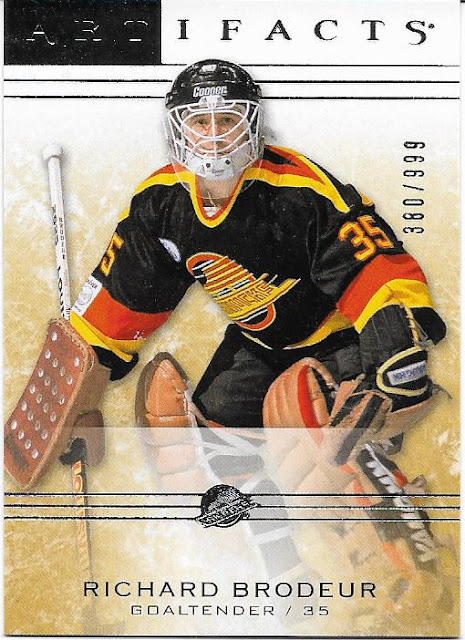 Hideous, ugly, abysmal.  I've heard many words to describe the Canucks jerseys in the early 80's, but personally I loved them.  Many many years ago I had the yellow home jersey, but time (and weight) forced me to give it up.  When I saw this Richard Brodeur card, the memories came flooding back and I had to pick it up. 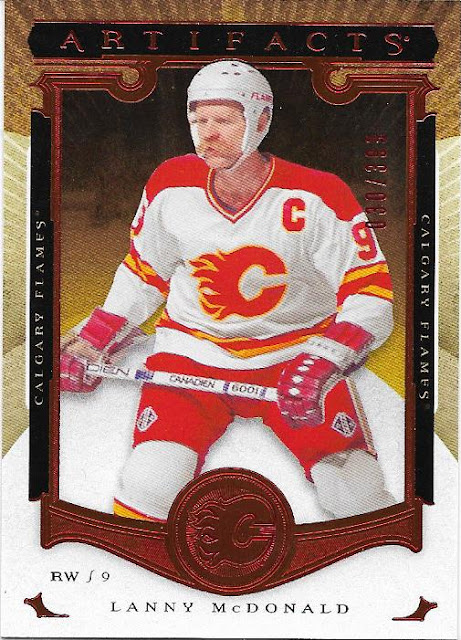 I was always a Lanny McDonald fan, and seeing him win the Cup with the Flames was as good as if the Leafs had won it.  This was another card that was a very easy pickup when I saw it on COMC.

I'm going to save the other serial #'d cards for another post, but overall this purchase filled a lot of holes for me, along with knocking down some want lists.  I don't know how much more vintage I'll purchase off of COMC, but so far, so good...

thanks for reading, Robert
Posted by Robert at 12:00 PM