I get by with a little help from my friends

I'm pretty sure that my latest serial numbered project will probably take just as long as it's baseball counterpart has.  To be honest, I'm not worried, because I know that I will enjoy putting the serial numbered hockey set together just as much, if not more, because of the variety of cards that will be coming in.

You can take the boy out of Canada, but you can't take the Canada out of the boy...

Speaking of Canada, one of my favorite multi sport bloggers, Doug from the Sportscards from the Dollar Store blog instantly sent out a care package of serial numbered cards to get the set off to a flying start.  I have a feeling that he'll be a regular contributor to this set!  It took me a few minutes to figure out how I was going to scan 19 cards to show off.  A half dozen scans later, I have a post to put together. 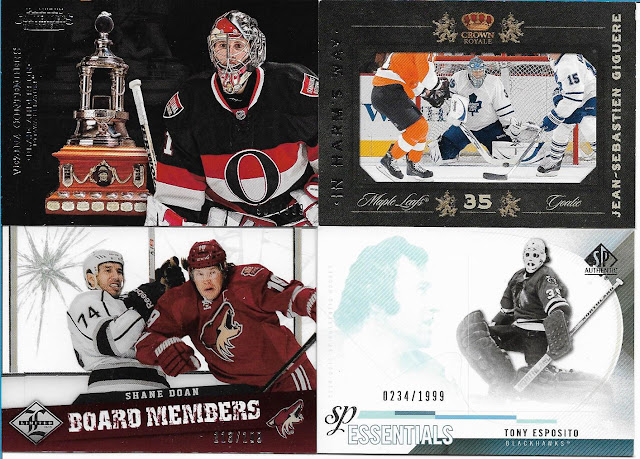 I've been so out of touch with hockey products over the past decade that a lot of these cards that will come in will be brand new to me.  My favorite of this 4?  Nope, not the JS Giguere Crown Royale card in the upper right, it's the Tony Esposito SP Essentials in the lower right.  The card is from the 10-11 SP Authentic set, and I love the dual photo of Tony in his goalie gear on one side, with a faded head shot on the other.  Magnificent!  The Shane Doan Board Members card is actually an acetate card, which is the reason why it probably scanned so well.

You probably will not see a whole lot of Victory cards in this set, so the Martin Straka on the left will be a rare sight indeed.  What jumped out right away about the Dion Phaneuf card in the center was that he had the 'A' on his chest instead of the 'C' which he wore during most of his time in Toronto.  I figured the card was at least a few years old and sure enough it's a 2010-11 Certified Mirror Red.  Even though he's 23, Nick Cousins is still new on the NHL scene, only having played portions of the past 2 seasons in the black and orange.

There's a couple of young Washington Capitals stars on this scan, but the card that instantly caught my attention was the Nail Yakupov Panini card from the Toronto Expo.  I believe that there's still hope for Nail now that Edmonton has signed a couple of veterans and hopefully starting to turn the corner.

There's the Coyotes captain again, this time featured on a 2015-16 Artifacts card, a product that will probably be seen quite a lot in this set.  I'm not too sure where Dana Tyrell is right now, I couldn't find any stats for him for the 2015-16 season.  He was traded to the Columbus Blue Jackets the year before, and only found the lineup for 3 games.  On the other hand, Paul Martin is still going strong well into his 30's, coming within 2 wins of his first Stanley Cup last year in San Jose.

I hadn't heard of Cody Kunyk until seeing his card in this lot, that's because he's appeared in just 1 NHL game, which was just enough to get him on a card.  Nate Guenin's NHL path has had a lot of twists and turns, and it wasn't until his age 31 season that he became a regular on a NHL roster in Colorado.  If you're wondering who the rookie on the Nashville Predators is, so was I!  Serious fail from Donruss here, not having put Ryan Thang's name on the front of his card.  He's of the same ilk as Cody, appeared in 1 NHL game earning him a rookie card the next season.

Nikita Zadorov was part of the trade on draft day 2015 with Colorado that saw the Sabres pick up Ryan O'Reilly.  That trade will be tilted heavily in the Sabres favor for a long time unless Nikita and the others that Colorado picked up start to develop.  I thought the Patrick Marleau card was an insert, but actually it's part of the base set from 08-09 Artifacts.  I thought that Martin Gerber had a longer and more distinguished NHL career, but it turns out that during his 8 NHL seasons, he was the #1 starter for his team in only 2 of those, and won just 30 games in a season once.

The least I can do to thank Doug for his amazing generosity is give a link to his COMC store, maybe there's something there that you'll want or need?

Thank you Doug, your envelope was greatly appreciated!!

thanks for reading, Robert
Posted by Robert at 9:09 PM