With the recent acquisitions at the monthly card show, I have a little over 100 cards towards the set.  I may need to make the posts on this project a little more frequent in order to keep up.   This is the 6th post so far... 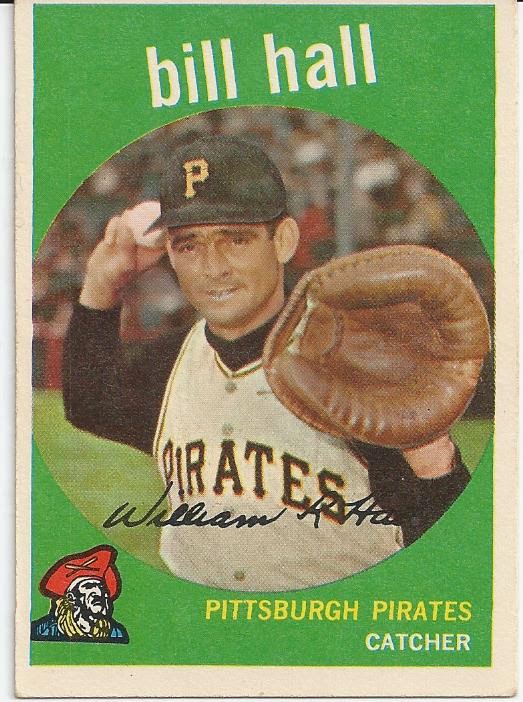 My poor effort at scanning unfortunately chopped a little off the top of Hall's card.  There is a little more white at the top, making this a nice copy of Bill's only card.  Many of you will probably remember the Bill Hall that played for the Brewers during the early 2000's.  The Trading Card Database doesn't distinguish between the two players if you do a Bill Hall search.

I'm pretty sure that this was one of the first cards I purchased for the '59 set last May at the Robert Morris card show.  It's in really good shape, the corners are nice and the edges are nice and smooth.  I don't think that I'll even worry about replacing this card.

Career beginnings:  Bill signed with the Pirates as an amateur free agent in 1947 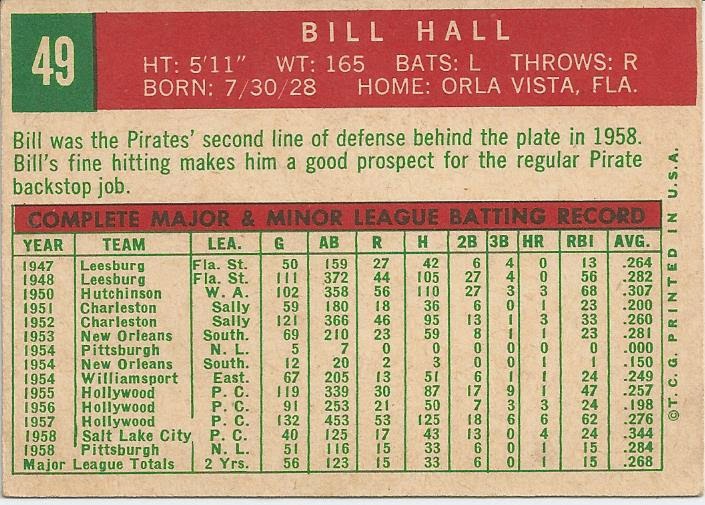 Bill spent his entire 13 year career in the Pirates system.  I can see why Topps wrote the line that Bill was a fine candidate for the regular catchers position. Bill was one of 3 backstops to play for the Pirates in 1958, and his OPS was higher than the other catchers who played for the Pirates that year.   Unfortunately for Bill, the Pirates made a big trade in January of '59, picking up Smoky Burgess (the #1 catcher for the '59 Pirates), Harvey Haddix and Don Hoak from the Reds for Frank Thomas and 3 part time players.

thanks for reading, Robert
Posted by Robert at 8:35 PM