I waited a long time to complete this set.  The first set that I ever collected as a boy.  And now, that I have all 660 cards in hand, and have had a chance to look at them all in their glory, I've decided to try and rank them.  I looked them over, and found 20 cards that I felt were better than the others.

This is totally based on my tastes, with a lot of the reasons that I ranked them as such based on a yearning for the past.   A poor reason I'm sure, and no doubt there are a lot of people out there that will disagree with some of the cards I've chosen.

But while the cat's away, the ranks are here to stay.   I hope you enjoy the countdown, which I will split up into 4 posts, one for each day that I'm on vacation. 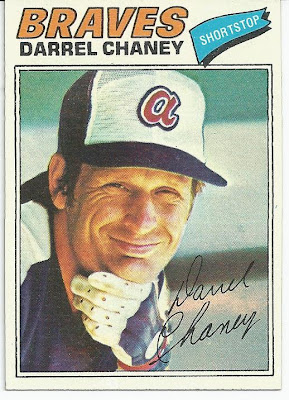 I'm sure you all are thinking "why in the world would this card be in a top 20 countdown?"  If I were a baseball player, such as Darrel was back in the late 70's, I'd be happy as hell like he was.   Why not show it on a baseball card?

I also don't recall the old style scripted "a" on the Braves caps, so that helped the card hit the top 20. 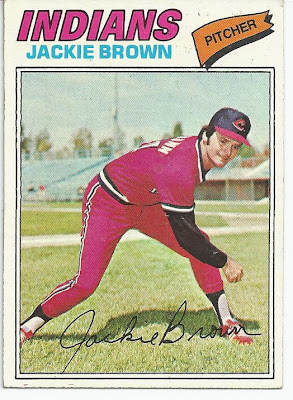 Combine the red Indians unis from the 70's with the name of an unheralded Quentin Tarantino movie (see here if you don't remember), and then add in a pitcher doing a pose that looks like it should have been on the "20 minute workout" show in the 80's, and for me you have a card for the ages. 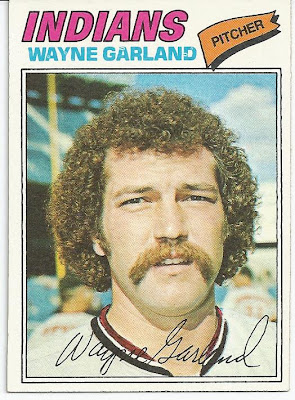 This hairstyle reminded me of my buddy Chuck, his hair wasn't as bushy as Wayne's, but close enough.  The airbrushers did their best to get rid of the Orioles colors on Wayne's jersey, alas they didn't do a very good job (at least from where I sit...). 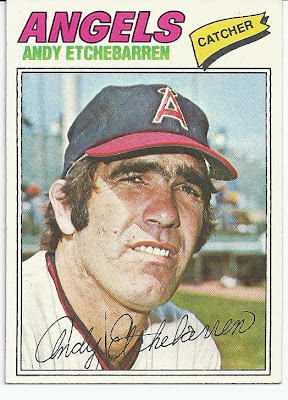 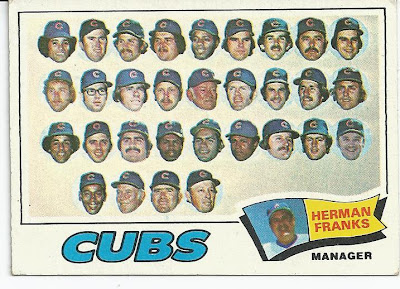 The first multi player card in the countdown, and the only team checklist featured in the top 20.  The floating heads still freak me out, but combine 31 floaters with a manager named Herman Franks (where's Billy Beane when you need him?), and you get a classic card that deserves a place in the countdown.  There's a few names on the back you might recognize, Bill Buckner, Manny Trillo, Bill Madlock and Ray Burris to name 4.  The '77 Cubs finished right at .500, but still were 20 games behind the East division champion Phillies.

Hopefully I haven't lost any of you out there... 15 through 11 tomorrow

Thanks for reading, Robert
Posted by Robert at 8:30 PM