I guess yesterday's post was the impetus to get me scanning and telling the story of last week's show.  I have a decent story to tell you as well.  But first, let's get to the goodies.

The first table I hit had several quarter boxes, and I found enough to spend a $10 bill on. 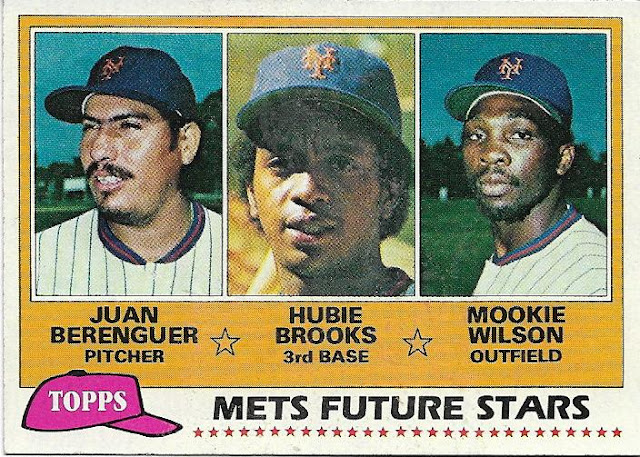 How many of these Topps Future Stars cards have we seen over the years that have all 3 players on the card go on to have solid MLB careers?  I don't recall too many (although I don't have them all...yet), but this trio all had some quality seasons in the bigs.  Just wanted to throw that out there... 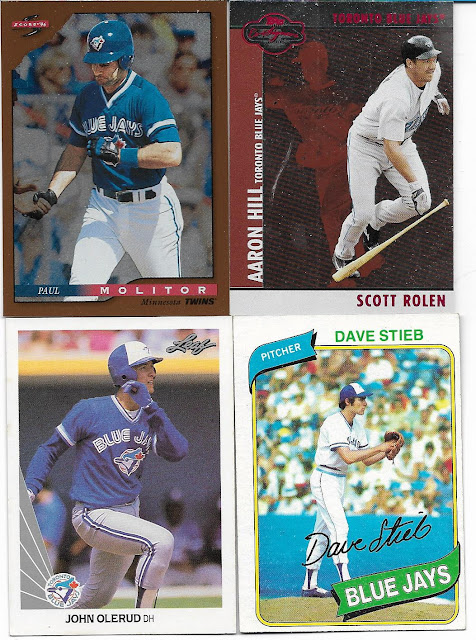 4 quarters.  The Molitor is a dugout collection, and even though the team says Minnesota Twins on the bottom, I'll count it as a Blue Jay card.  The Scott Rolen Topps Co-Signers card is part of a mini sickness that you'll see more of in a minute.   Olerud and Stieb RC's for a quarter?   All day! 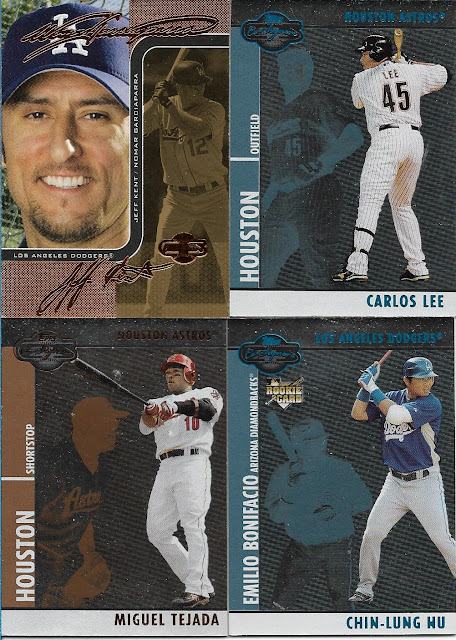 I don't know what it is about the Co-Signers cards that has this strange effect on me.  Multiple colors?  Check.  Serial numbering?  Check.  Multiple photos with some serious shading effects on the front.  Check that too.  Not sure why, but I decided to pull these out and give them a home....

I swear that Nolan Ryan has been following me around lately.  Every time I hit a show, I see several cards of his for cheap, and I have no idea why.
The Dave Parker is my deliberate reminder to get my ass in gear and get a '76T want list on the blog.  I can't even remember how far along I'm into that set.
Fred Lynn from 77T?  Oops, don't know why but I thought that was from another early 80's set.   I guess by this time I was hallucinating and just decided to throw it into the pile.

All 3 for a quarter apiece.

More Blue Jays.   Love the Fleer Futures on the right, it has some Japanese characters on the front which made it look cool to me, plus the fact that I was sure I didn't own it already... 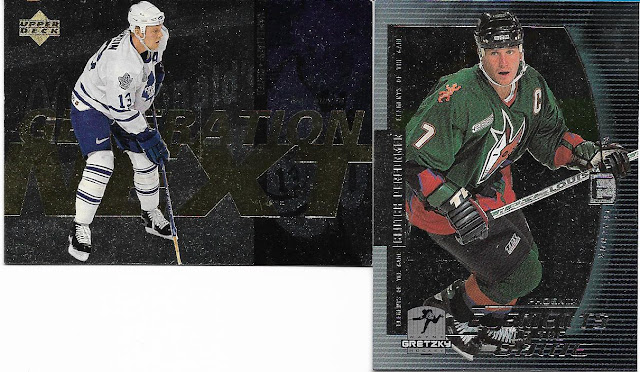 Two cards from two dormant hockey PCs.  I've been doing so well getting my stuff in order lately that maybe I'll do the same for these two collections and get them rolling again. 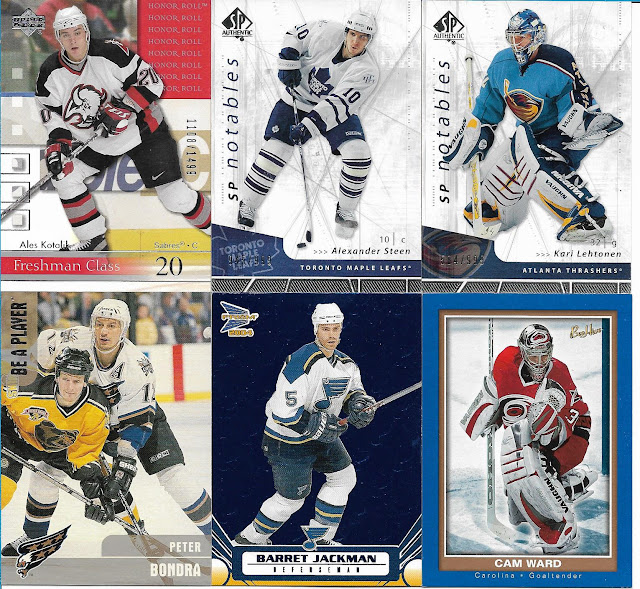 Now, as all you box hunters know, after a while you get a bit tired sitting there and cruising through the boxes.  By the time I started pulling these cards out, I was feeling a bit restless.  So, I took a big chance on the serial numbered cards, and lucky me, I hit 5 out of the 6 for the SNI hockey set (the only miss was a 99-00 BAP Patrick Marleau card, so not a total loss there either.

The Cam Ward card from the 05-06 Beehive set is for the Goalie Mask set.  Just in case I had gone totally blind, the penny sleeve had the word BLUE in big bold letters.

I hit another table, and this dealer had a bunch of singles from this year's Topps.  10 cents apiece.  I started diving in, had pulled out about 40 cards when I came across this card. 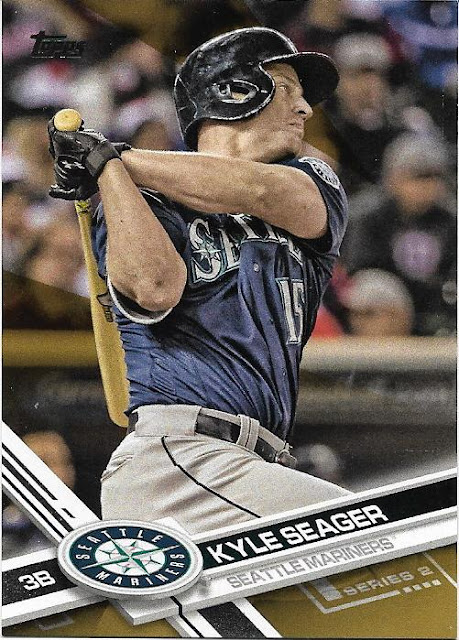 Believing in good karma and not wanting to see a dealer get gypped, I told him "Hey, I think you've got a gold parallel in here among the base cards."  My jaw almost hit the floor when he gave me his response.

Holy shit.  I am a big believer in karma, and hearing him say this proved it even more for me.  During my digging I found 3 more gold cards, and then I found this card of Mark Rzepczynski the likes of which I haven't seen anywhere on the blogs yet. 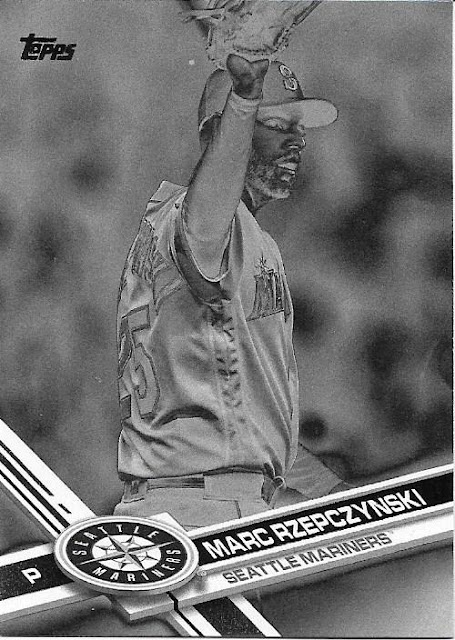 There is some absolutely weird stuff coming out of baseball products at times, but negatives?  I had a look on TCDB, and there hadn't even been any of them posted yet.

For 10 cents, you better believe it came home, even if it's just for a conversation piece.  I spent 10 bucks at his table, and knocked off almost 50 cards from my Series 2 want list.

So for the past 2 card shows, I've spent a grand total of $25, had a great time at both shows digging through boxes, and had a couple of good stories to tell.

Can't beat that with a stick.

thanks for reading, Robert
Posted by Robert at 7:52 PM