Get your mind out of the gutter, this post isn't about that....

All I've bought so far for 2017 Topps flagship is two rack packs.. Tom from the Eamus Catuli blog provided me with a hangar box to start the year, and I almost don't want to buy any more.  Why you ask?

Because I only have 3 doubles so far.  Addison Russell, Jimmy Nelson and Archie Bradley.  All of them horizontal cards. 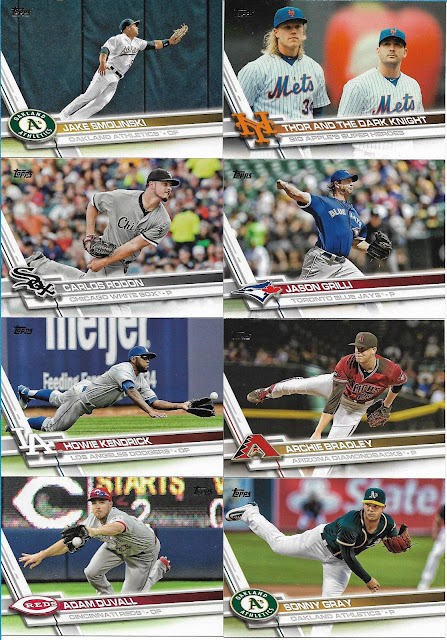 With a lot of the photos that Topps chose for this years set, the horizontal layout is a good choice.  Howie Kendrick is a good example of that.  Vertically, that card probably would have lost half of Howie's body... 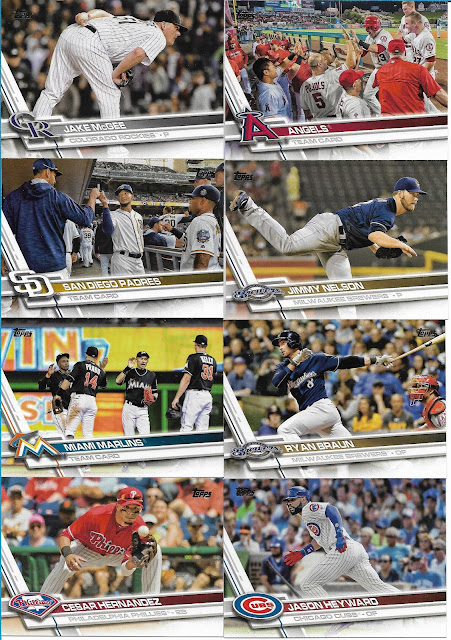 The team cards also work with the horizontal layout.  The Marlins and Angels do a fine job of making my point.   Ryan Braun's card also works, the photo and layout allows the entire swing to be shown. 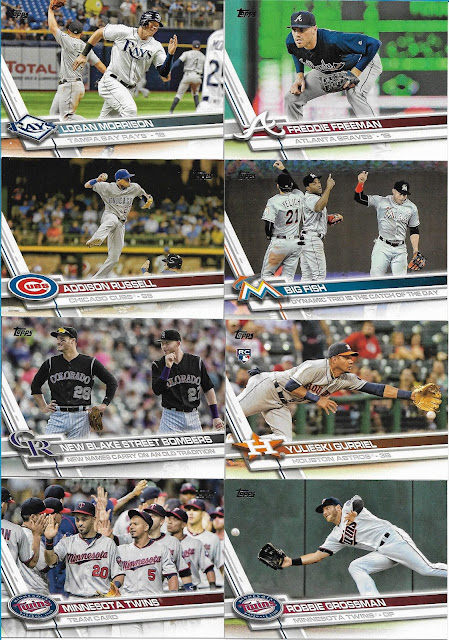 Logan Morrison's card is also a good example of a card where the shot is worthy of the horizontal layout.  There's a lot going on in that photo, and a lot of people to be shown.  Vertical just wouldn't have worked here.  Robbie Grossman's card is another good example; vertically we just wouldn't have been able to see enough of what's happening during that shot.   Yulieski Gurriel is even better, the full extension still doesn't seem to be enough for him to catch the ball.  Don't think you get that with a vertical shot.

These 3 cards may not be good examples, as all we have out of the ordinary here is Adam Lind playing basketball with his helmet.  I wonder if he hit the shot...

I'll be interested to see if the 1:4 ratio of horizontal to vertical cards holds out as I build series 1.  The reason it struck me is that I don't remember this many horizontal shots on cards over the past few seasons.

It may just be the way that the cards are being packaged.  The box/packs that I've opened so far have had the horizontal cards grouped together, which made them stand out to me.

Anyone else notice the uptick in horizontal cards?  Or am I seeing things?

Thanks for reading, Robert
Posted by Robert at 10:55 PM