I've spent the past 7.5 months rooting for a team filled with kids.  A lot of them either A) barely able to shave, and B) cannot buy alcohol in the US of A.

But you know what, it doesn't matter that these are kids anymore.   The Maple Leafs are headed to the playoffs.

It's been such a struggle to get there for the past decade, I'm in a state of delirium.  This post is probably going to meander and not make a whole lot of sense to anyone who isn't a Leaf fan, but to be honest I don't care tonight....

These three were a line for a good portion of the season, until the coach took Nylander off the line and put him with Auston Matthews, now a 40 goal scorer in the NHL.

They're going to the playoffs. 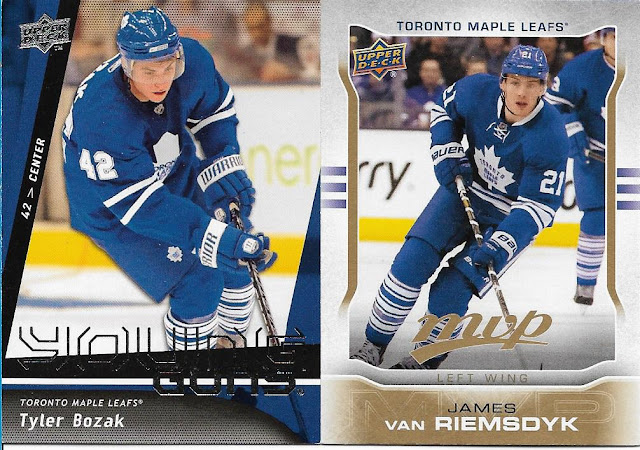 These two have been linemates for quite a while now, the last few seasons with Phil Kessel, and this year with young phenom Mitch Marner.

They're going to the playoffs as well.  Looking to exorcise the demons of the 7 game playoff loss to the Bruins for years ago. 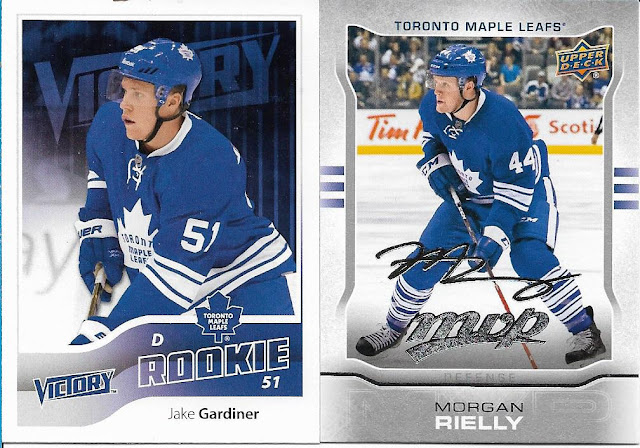 These two are probably the best defensemen the Leafs have right now.  Rielly wasn't a Leaf yet when the Leafs lost to the Bruins in 2013.  Gardiner had arguably the best series of anyone on the Leaf blueline that year with 5 points in 6 games, and was almost the goat tonight when he accidentally kicked in the 3rd Penguins goal.

No matter, they're going to the playoffs.

Now this post would have been helped if I had cards of Matthews, Marner, Fredrik Andersen or any of the other dozen or so Leafs who helped get them to the playoffs this year.  Oh well.

The Blue Jays will have to take a back seat to the Leafs for a couple of more weeks, cause the Leafs going to the playoffs.  Can you tell I'm just a bit excited...

Heaven help me if they actually win a series.

Thanks for reading, Robert
Posted by Robert at 11:23 PM