I completed a few errands yesterday morning and while doing so I decided to stop into Target a pick up a few packs of cards to see if I could pull something worthwhile for myself.

I grabbed two packs of '17 Heritage and these three cards were the "highlights":

I guess I don't remember seeing anybody pull any of the Rediscover Topps cards from Heritage, so I was quite disappointed (to say the least) that this '91 Jody Reed came out of a pack.   Why Topps, why?   The Anthony Rizzo HBP card looks pretty cool, but I'll have to find a Cubs fan who would enjoy it more than I.  The Trea Turner is a SP card, so now I have 6 of the SPs, and only need countless more.

4 packs purchased so far, just 3 doubles.  Not bad, but there's a long way to go.

Despite my grumbling, I will pursue the '17 Heritage set.  Seeing as I finally picked up the final 3 cards for the '11 Heritage set I need to replace it with something.... 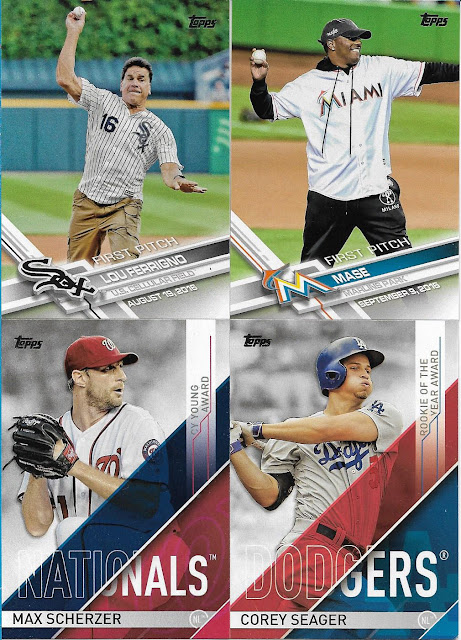 I also picked up a couple of rack packs of '17 Topps flagship.  Did as well as could be expected.  Couple of first pitch and a couple of award winner cards here.  Available to whoever wants them.
The Scherzer is already a double...

I've pulled a few of the '87 inserts, Dansby Swanson being the latest.  The Shin-Soo Choo card in the middle is a rainbow foil parallel.  The George Springer card tells us that he wears #4 in honor of his parents and 2 siblings.   These 3 cards are also up for grabs.

As far as duplicates go, my luck has been horrible.  I've bought 5 rack packs so far (36 cards in each), and have the equivalent of one of those packs as duplicates.  From where I sit, that's not too good.  But I'll still give this set a go anyhow, because I like the look of the design more this year than last.

I'll have want lists up sometime this week, as long as the Leafs chase for the playoffs doesn't distract me horribly from my card pursuits.

What am I saying?  I didn't post last week.   I'm terribly distracted!!

thanks for reading, Robert
Posted by Robert at 5:42 PM