The thrill of the chase...Serial Numbered Insanity

I really have tried to avoid using the habit blog in recent weeks to promote the Serial Numbered Insanity set.  I kind of felt that that I was taking a little away from the other blog by putting the cards that I have received from the blogosphere on trade posts here.

But last night's post led to tonight's post, and naturally I've made an exception.  Because SNI (loved the use of the initials Greg...had never thought of it until your comment) is the modern version of the thrill of the chase.

You hear a lot of chatter this way and that about inserts/parallels on blogs all the time.  Some guys love them, some guys like them only if they fit their collecting needs (team collectors, for example), and then there are those that wouldn't give I/P the time of day.

Suffice it to say, I am a junkie when it comes to numbered parallels.  A sad, perplexing addiction that probably stems from my love of numbers.  Seeing numbered cards such as this:


are a constant reminder of the variety of sets that are already included so far.

Then there are cards that show the evolution of a player...


Some cards show that even limited print runs can be a part of it all:


Certain cards that remind me of trades that were made as well..


Then there is the joy of watching the way that pages develop when placing the cards into sheets, similar to the '64 Topps set I showed yesterday.

Some sheets have only 1 card:


There are some pages that by random chance show patterns: 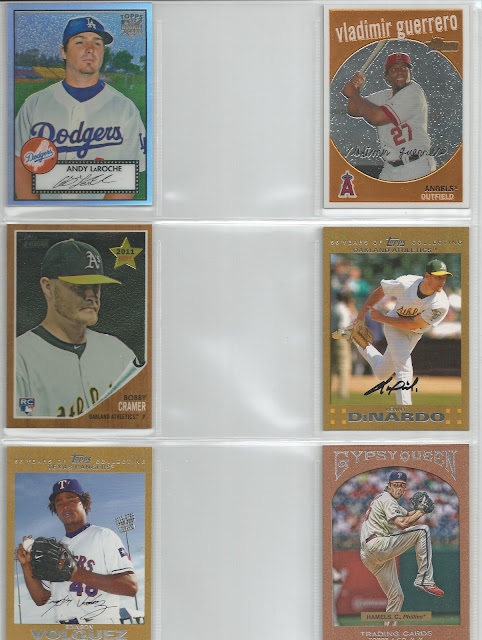 Then there are the full pages that look great once completed!


How does this give me "the thrill of the chase"?  There have been a few times now where I've gone to card shows, SNI want list in hand, and found numbered cards only to discover that I have that number already.  It's also been a blast when a fellow blogger/collector sends me the "hey Robert, I've got these numbers for your set" email.  There aren't many feelings that are better than a collector taking the time out to search through your lists, trying to help you out.  Awesome.

It's only going to get worse when I'm down to the last handful of cards, and need certain numbers from certain teams.  Just imagine, card #1142 is the last serial number, and I only need a Baltimore Oriole player.

Needle in a haystack anyone?  Wondering if down the road the thrill of the chase because the nightmare of my existence....

thanks for reading, Robert
Posted by Robert at 9:00 PM