This choice for the Blue Jay Monday post is somewhat random, I chose a card off of the 9th page of cards that I haven't put into a binder as of yet.  The other cards on the page were 2009 or later, plus I really don't know much about Ohka's time with the Blue Jays, so I decided this would be a good fit. 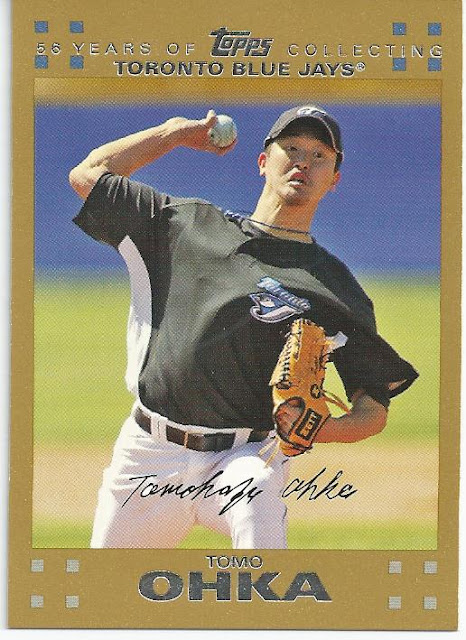 I really do like how the gold on the 2007 release stands out against the silver lettering.  It's a sharp contrast to the black border on the regular base cards.

Turns out that there's a reason that I didn't know much about Ohka's time with the Jays.  It was limited to a total of 10 starts during the first 2 1/2 months of the 2007 season.  To be released in mid June, you have to know that the numbers weren't that great.

2-5, 5.79 ERA, 1.607 WHIP.  Walked one more batter than he struck out.  10 HR's allowed in 56 innings.  How bad was it for Ohka during the 2007 season.  He signed with the Cardinals and Mariners after being released by the Jays in mid June, and was out of work with both of those teams within 3 weeks without having thrown a pitch in the majors.  Both stints with the other 2 clubs consisted of a few starts in the minors with less than impressive stats.

I looked up his stats during his time in Japan, and they weren't that flattering either.  It appears that the Red Sox, who originally signed him in 1999, did some scouting on him and found that even though his numbers weren't all that great, they were impressed with the control he had and how well he could locate his pitches.

Ohka's best run of success in the majors was a 2 year run with Montreal, 03-04, in which he won 23 games and pitched nearly 200 innings in each of those campaigns.

Kind of interesting that Topps was able to squeeze a card of him in a Blue Jay uniform (it appears that the photo was from a spring training game, judging by the jersey) for inclusion in series 2 in 2007.  Chances are that he was actually released by the Jays before this card actually hit store shelves.

thanks for reading, Robert
Posted by Robert at 10:51 PM