We've returned unscathed from our trip up and down I-77, and I'm back to semi regular posting.  Part of the trip was stopping the mail for 2 weeks.  While we were gone a couple of trades came inbound, including one from a fellow trader also named Robert (TCDB ID: bkim).  Robert became quite concerned when the USPS website showed his package delivered, but I hadn't updated the website to show the trade as completed.

Thankfully, he was good with my explanation that the package had arrived after we had left for vacation...

This was a solid trade package, as it hit a trio of sets.  Two Padres, including Gene Richards who isn't just choking up on his bat, he's strangling it.  The Tim McCarver card is also awesome, showing off the big wad of chaw in his left cheek.  You won't see that on today's pics... 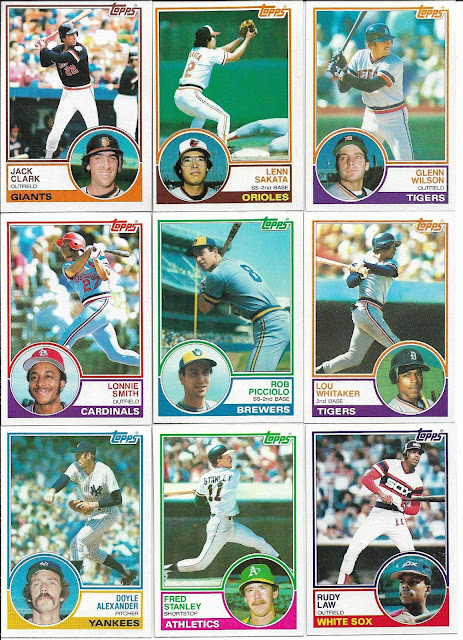 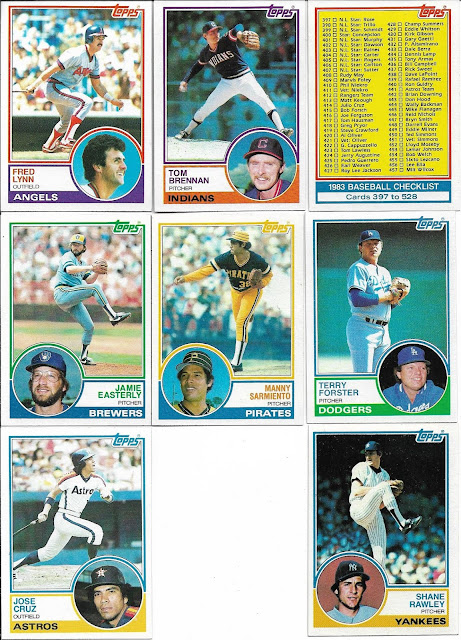 19 cards are off of the '83 Topps want list, and they're all names that I can distinctly remember playing/watching on TV as a teenager.

Finally, 3 horizontal cards to show off, including an addition to the John Olerud collection.  I had a bit of a tough time remembering Olerud in a Yankees uniform, and then I looked up his stats and I know why.  He played just 2 months in the Bronx during the '04 season, signing with them just one week after being released by the Mariners.  2004 was also the 1st time since '91 that Olerud didn't walk more than he struck out in a season (61 walks and 61 K's that year).

Thanks for the trade Robert!  The cards are really appreciated!

Robert
Posted by Robert at 8:39 PM