So far, so good, so much stuff

My moving situation was rather unique in that I made it to Florida last August, while my wife and my stuff didn't join me until the beginning of December.  I took a week off in October to go up north and help with packing, but for the most part, my better half did a lot of the packing.

I can only imagine what we'd be going through now if we brought everything we had in the house.  Thankfully we were able to sell/give quite a lot of stuff away, and the burden we are facing now is a lot more manageable.  The one thing however that didn't get pared down was my card collection.  Most of that thankfully is in boxes that were easy enough to move.  However, the binders were plentiful, and sadly, not labelled very well.

That makes things a little tougher when you're getting settled.  I was finally able to dig up the first binder of the SNI set the other day, which means I'm can get back to posting and making sure that I've not made any mistakes with this craziness.

With all that being said, here's page #9 of the SNI set, which is a bit overdue. 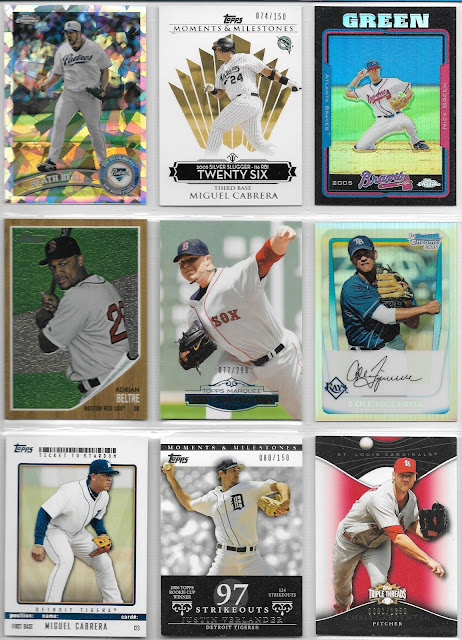 Dopey me, the last post I did for page 8 I mentioned that 2 of the 3 teams that didn't have cards yet would be taken care of on this page.   WRONG!!  Just Detroit hit the board on this post, so I'm down to the Pirates and the Mets that haven't broken the ice.

Now, all I have to do is find the time to start writing posts again.
Posted by Robert at 11:15 PM