What is the difference between Gypsy Queen and A&G?

I bought a couple of rack packs of Gypsy Queen a couple of weeks ago.  Not a lot, just enough to satisfy my pack ripping jones that I had when I visited Target.

I like the cards.   The design isn't off the wall fantastic, but it's better than the past couple of years for my tastes.

Of course I'm starting off showing the Blue Jays cards I pulled.   The Glove Stories Kevin Pillar card becomes an instant must have for any Blue Jays card collector.  The TD Bank advertising in the background is a nice complement to one of the many acrobatic catches that Pillar has become known for while patrolling center field for the Jays.  It will be interesting to see what the Jays do with their infield when Devon Travis returns.  Darwin Barney and Ryan Goins have done a decent job filling in, but Goins doesn't have the bat that Barney has had, and Barney doesn't have as much versatility as Goins. 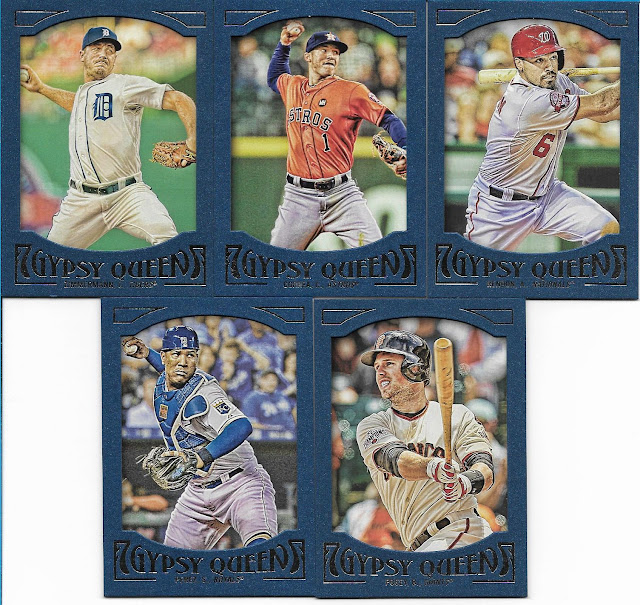 The parallel addict in me loves the blue parallels, and I would love to have each of the Jays in the set.  These 5 are up for trade if anyone wants them...

A&G used to have the black bordered parallels which were really nice (especially in the earlier releases), I'd love to see those


The minis in both sets is a feature that pushes me away a bit.  Having 1/6th of a pack that costs ~ $3 be something that you're forced to get but absolutely don't want to collect can be tough to stomach.  But for some reason, I'll take the hit when it comes to Ginter, but I won't bite on Gypsy Queen.

Seeing the images for 2016 Ginter here makes me want to chase it again this year.  Come the 3rd week of July, I'll definitely have it in mind where as Gypsy Queen was only a thought because I'd seen posts about it in the blogosphere.

So what's the difference.  I am wondering to myself what is the difference when the two sets are relatively the same type of offering.  Design?  It certainly isn't price point.  Name?  They both have classic names, so I don't think that's it.

Maybe it's because A&G has been more widely accepted than GQ.  I don't know what it is.  But the set builder in me doesn't have time for Gypsy Queen, but is ready and willing to chase after the '16 A&G release.


Do you have a preference, and if so, why?

thanks for reading, Robert
Posted by Robert at 7:00 PM